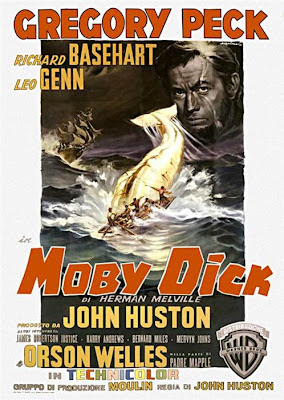 By 1956 John Huston was developing a taste for risk-taking in his movie projects. Sometimes his gambles paid off and sometimes they didn’t but the results are always interesting. Moby Dick represented a very considerable gamble and while it found little favour at the time with either critics or the public it’s aged rather well.

Adapting Herman Melville’s novel to the screen presented many challenges. The narrative of the book is broken up by lengthy digressions and it’s more concerned with philosophical and spiritual questions than with telling a story. There is a great story in there though and Huston’s film makes the most of it. A young man named Ishmael (Richard Basehart) signs on to the whaling ship Pequod in 1841. Captain Ahab (Gregory Peck) is not interested in making money or catching whales. He is interested in one thing - revenge. A year or so earlier he had suffered horrific injuries in an epic struggle with a gigantic white sperm whale, a whale known as Moby Dick. He intends to renew the struggle and this time it will be a fight to the death, although as he explains to his first mate Starbuck (Leo Genn) it’s not Moby Dick that he hates. The great white whale is just a mask, and it’s what’s behind the mask that he hates.

Ahab is not just obsessive but also very thorough. He has studied accounts by other whalers and he has charted the movements of whales. He has developed a theory as to their movements and he believes he can accurately predict just where Moby Dick will be found. He intends to be waiting for the whale. His predictions prove to be accurate but the whale escapes. Ahab sets off in pursuit. By this time he has communicated his obsessiveness to his crew. They regard him as being almost a god and they are as keen for the final showdown as he is.

The screenplay by Huston and Ray Bradbury sticks reasonably close to the book although naturally much had to be omitted. They have also striven for a deliberately archaic feel to the dialogue which suits the material. It gives it a kind of Old Testament feel, combined with some of the flavour of epic poetry. The danger with this approach is that it can make movie seem too literary but in this case that’s not such a disadvantage. Huston wanted the movie to have the washed-out sepia look of old photographs whilst still being shot in colour and he and director of photography Oswald Morris came up with a complicated process to achieve this. It succeeds extremely well. A few years later Huston did something similar in Reflections in a Golden Eye - he seems to have been obsessed by the idea of getting away from a conventional colour palette in his films made in colour.

Of course you couldn’t make a movie such as this at the time without utilising process shots but they generally work pretty well. The movie avoids any hint of appearing to be studio-bound while at the same time avoiding a realistic look. This is a tale that does not lend itself to a straightforward realistic approach. A major challenge was to satisfy the commercial requirements for an exciting action-packed entertaining film while preserving as much as possible of the metaphysical dimension of the novel. It has to be more than just a seafaring adventure yarn. It’s an almost impossible compromise that mostly comes off.

The biggest problem was the casting of Gregory Peck as Ahab. While it’s true that someone like Orson Welles would have been more suitable Peck is actually surprisingly effective. You just have to forget his usual screen image. Leo Genn as Starbuck is more of a problem - he’s good but a little too civilised to be convincing as the first mate of a whaling ship. The rest of the supporting is excellent with Harry Andrews particularly good as the second mate. Richard Basehart as Ishmael is fine. As the narrator he has to be a neutral sort of character but also sympathetic. Orson Welles and James Robertson Justice contribute brief but impressively scenery-chewing cameos. The special effects are excellent. Filming the epic struggle between the Pequod and the whale in those pre-CGI days was awesomely difficult but those scenes are gripping and convincing. Huston also comes up with some memorable visual images - Orson Welles preaching from the prow of a ship mounted inside a chapel in the Pequod’s home port and the typhoon scene with St Elmo’s Fire dancing on the masts are both stunning, but they also contribute to the biblical feel of the story.

The DVD presentation of Moby Dick is quite acceptable and, importantly, preserves the unusual colour scheme.