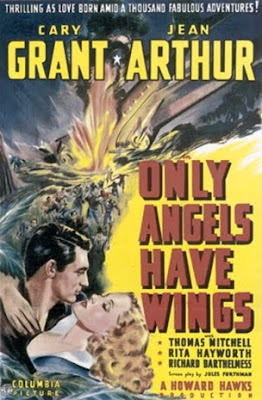 Howard Hawks made many superb films, but he made few greater than Only Angels Have Wings. This 1939 aviation adventure romance has everything you expect in a great Howard Hawks movie.

Bonnie Lee (Jean Arthur) arrives in the South American town of Barranca. She expects to stay only until the next day, when her ship leaves again. She immediately finds herself mixed up with Geoff Carter’s flyers. Carter (Cary Grant) runs a small airline. The airline has the contract to fly air mail over the mountains. Their aircraft cannot fly high enough to fly above the mountains so they must fly through a narrow pass at 14,000 feet, and they must do this regardless of the weather. It’s incredibly dangerous flying and accidents, frequently fatal, are common. As Bonnie is just about to find out. She was befriended by two of the pilots as soon as she left the ship and just a few hours later one of them, Joe, is killed. Twenty minutes after his fatal crash the other pilots are laughing and joking and when she berates them for having a good time so soon after his death the response is, “Who’s Joe?” It’s one of the most famous scenes in any Howard Hawks movie, and deservedly so. She soon discovers that their apparent callousness is not a sign that they don’t care; it’s a sign that they care too much. There is no other way they can cope.

Geoff Carter has other problems to deal with. The airline has one year to prove it can get the mail delivered on time. After that they will get a permanent contract which means a lot more money. But with several pilots and several aircraft already lost getting that permanent contract will be a real challenge. And then there’s the new pilot, McPherson (Richard Barthelmess). Only that’s not his real name, and everyone knows he’s the pilot who bailed out of a plane two years ago, leaving his mechanic to die. And the mechanic who died was the younger brother of Geoff Carter’s best friend and right hand man, The Kid (Thomas Mitchell). And to add to his worries, McPherson arrived with his wife Judy (Rita Hayworth), who just happens to be an old flame of Geoff’s. Not just an old flame in fact, but the great love of his life. He doesn’t need any more problems, but he gets them. Like having to fly nitro-glycerine to a mine site. His pilots are already unhappy about having McPherson there. And what is he going to do about Bonnie? She’s obviously crazy about him but he believes flyers should never marry. He’s seen what happens to the wives when their men get killed and he’s always vowed never to do that to a woman.

You’d think the poor guy already had more than enough to worry about, and then Bonnie goes and shoots him. Now he’s only got one arm that works, one of his other pilots is in the same boat, and he’s had to ground The Kid because his eyesight is failing. They still have one mail run to go before they get that contract, the weather is closing in, they have a new untested Ford Tri-Motor and if the mail doesn’t go through that’s the end of the airline. Only Angels Have Wings boasts some great aerial sequences (and some spectacular crashes). Apart from the flying sequences everything has a shot-in-the-studio feel which works to the film’s advantage. You feel like these people are in a little universe of their own where they have to work out their own problem and their own salvation.

Hawks was fascinated by what Hemingway referred to as "grace under pressure" - men facing danger and death with dignity and good humour, because how else can you face it? It’s a movie about old-fashioned virtues like friendship and courage, and overcoming fear and failure. It’s the sort of thing Hawks did supremely well. It could have been corny and contrived and conventional but it isn’t. Cary Grant gives one of his finest dramatic performances. It’s a difficult and complex role. Carter is a cynical tough guy but he has to. He has to live with the knowledge that every time he sends a man on the mail run he may be signing his death warrant. When the weather is so bad that he can’t send anyone up he makes the flight himself. Thomas Mitchell, a wonderful character actor, is in fine form. Rita Hayworth wasn’t yet a star but she shows flashes of star quality. Jean Arthur is solid. Richard Barthelmess is splendid as a man being eaten alive by shame but determined to overcome it even if it costs him his life.

The characters are almost stereotypes, and in the hands of a lesser film-maker that’s what they would have remained. In the hands of Hawks they become much more. There’s not a bad performance in the movie. The flyers are men who know that each flight might be their last but this is the life they’ve chosen and they wouldn’t give it up for anyone. This is Hawks at his best, a wonderful movie that manages to be both tragic and positive, and a movie entirely lacking in self-pity.

Columbia’s Region DVD release is extremely good despite the lack of extras.
Posted by dfordoom at 2:31 PM