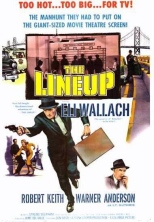 Don Siegel’s crime thriller The Lineup was based on a popular television series of the same name, and shares the TV series’ San Francisco setting. It was released by Columbia in 1958.

This is a movie that really hits the ground running. The opening sequence is violent, exciting and spectacular. In fact it’s so good you wonder if the rest of the movie will be able to maintain the same standard. The good news is that it does.

A porter throws a suitcase into the back of a cab and the crazed cab driver then proceeds to run over a cop and then crash his cab. The suitcase belongs to a passenger who has just arrived in San Francisco on an ocean liner. The suitcase is impounded as evidence and when it’s examined it proves to contain an ancient Chinese statuette packed with heroin. The owner of the suitcase certainly doesn’t fit the usual profile of a dope smuggler. Philip Dressler is prosperous and middle-aged and has a high-profile and very respectable job with the city’s opera company. He seems to be completely unaware of the surprise package hidden in the statuette. He could be telling the truth. The police decide to cut him loose and tail him in the hope that he might, either knowingly or unknowingly, lead them to the big man behind the drug smuggling.

The scene then switches to an aircraft landing at San Francisco airport. On board the aircraft are two middle-ranking members of the drug syndicate. Dancer (Eli Wallach) is a vicious sociopath who wants to improve his mind; Julian (Robert Keith) looks like a kindly middle-aged uncle but in his own way he’s every bit as crazy as Dancer. The relationship between this unlikely pair of syndicate heavies is the real core of the film and is its greatest strength. 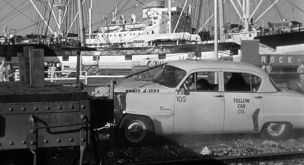 The drug smuggling operation makes use of innocent tourists. They are sold trinkets and curios in various Asian cities. The heroin is hidden inside the curios. When these luckless tourists return Stateside their luggage will be stolen in order to retrieve the drugs. It seems like a clever operation, and the way in which it goes wrong is delightfully bizarre. So delightfully bizarre that I’m not going to tell you anything about it.

The movie switches continuously between the activities of Dancer and Julian as they criss-cross San Francisco collecting the drugs, with the wildly unstable and totally deranged Dancer leaving a trail of corpses behind him. That trail of corpses will provide the police with most of their crucial leads. At the end of the day Dancer has to deliver the drugs to the big boss, a mysterious and anonymous character known only as The Man. And if he wants to live Dancer will have to sell The Man a totally unbelievable story that happens to be entirely true. 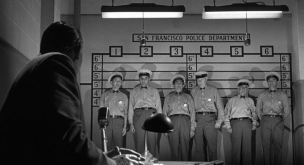 Don Siegel has a reputation for handling action sequences with considerable skill and that talent is seen to superlative advantage in this movie. This is one of the most adrenaline-charged crime action movies of the 50s, and compares very favourably indeed to the action movies of any decade.

Anyone who thinks irony was invented in the 90s or that Quentin Tarantino defined criminal cool will have to think again after watching this movie. The dazzling repartee of the two psychotic hitmen, combined with some very black comedy, makes Pulp Fiction seem rather redundant. And Dancer and Julian are far more interesting and complex (and disturbing) than any characters in a Tarantino movie. The two hitmen’s wheelman, Sandy McLain (Richard Jaeckel), provides the perfect third component of one of the most extraordinary trios of hoodlums you’ll encounter in any movie. 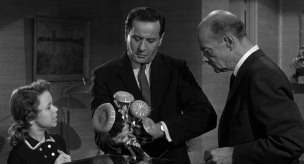 The scenes showing the police investigation are done in a kind of quasi-documentary style that neatly counterpoints the surreal scenes involving dancer and Julian.

Siegel uses some classic San Francisco locations and uses them brilliantly. The aquarium scenes, the crucial sequences in the extraordinary (and gigantic) Sutro’s Museum amusement arcade, the nail-bitingly tense wait for The Man in this amusement complex, are all done with consummate skill. Hal Mohr’s cinematography is impressive throughout. This really is a great-looking movie. The scenes in the apartment of the unwitting drug courier with the woman and child being menaced by the increasingly crazy hitmen must have been deeply unsettling to audiences in the 50s. They’re steel deeply unsettling today. The whole sequence involving the doll is disturbing, paranoiac and shocking. 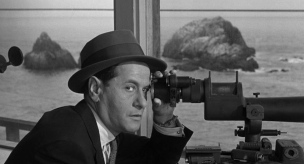 To cap it all off Siegel ends the movie with a terrific car chase. Amazingly enough, even though he uses process shots, it’s a car chase that still stands up superbly today.

It’s not a perfect movie. It has a few pacing problems very early on but it’s a movie that just gets better and better as it goes, especially when the plans of Dancer and Julian start to unravel and desperation starts to creep into their actions as they realise it’s all getting hopelessly and catastrophically out of control. Siegel builds the tension relentlessly.

Emile Meyer makes a wonderful bull-necked hardbitten detective. Robert Keith is superb as Julian. At first Julian seems to be the sane partner, the one in control, but as the movie progresses we realise he’s a full-blown psycho as well. Eli Wallach delivers a magnificent sucker-punch of a performance. 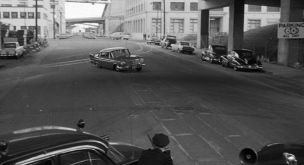 This movie is one of five in the Columbia Pictures Film Noir Classics I boxed set. It’s an excellent anamorphic transfer (the movie was filmed in widescreen format) and the extras include one of the most bizarre commentary tracks ever recorded with Eddie Muller and a totally deranged James Ellroy.

Whether The Lineup can be considered true film noir or not could be debated. It doesn’t really have the required plot elements or the right visual style but it does have the right feel. And while the visual style might not be pure noir it’s undeniably stunning. This is a turbocharged roller-coaster of a thriller and is very highly recommended.
Posted by dfordoom at 6:38 PM