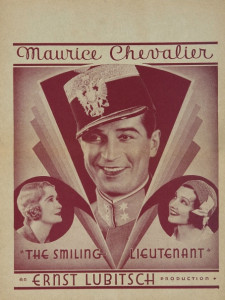 The Smiling Lieutenant, released by Paramount in 1931, is a fairly typical example of the Ernst Lubitsch musical. It’s a delightful frothy concoction, which is all it tries to be and all it needs to be.

Maurice Chevalier is Niki, a lieutenant in the 1st Austrian Guards Regiment. As you’d expect in a Lubitsch musical he’s a ladies’ man. In fact Niki’s ideas of the duties of an officer begin and end with the pursuit of the fair sex.

Niki’s latest love is Franzi (Claudette Colbert), a violinist with an all-girl orchestra. Franzi is something special for Niki, and he certainly doesn’t intend to ruin anything so special by proposing marriage.

Niki’s life takes an unexpected turn during a state visit by the King of Flausenthurm, a tiny neighbouring principality. As the king passes in his carriage, accompanied by his daughter the Princess Anna (Miriam Hopkins), Niki (whose regiment is providing the guard of honour) makes the mistake of smiling and winking at Franzi. It it a mistake since the princess thinks he was smiling and winking at her. 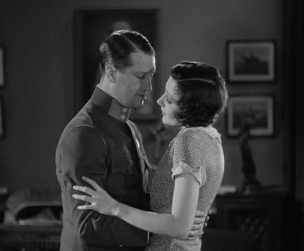 A scandal erupts and Niki is hauled before the King of Flausenthurm. Niki charms the king, and he charms the princess. Soon his little indiscretion is forgotten. Niki thinks he’s had a narrow escape but he soon discovers to his horror that he is now assumed to be engaged to the Princess Anna. That’s what happens when princesses think they’ve been winked at.

Niki isn’t the marrying kind anyway and he certainly doesn’t want to marry the rather frumpish Anna. And he has no intention of giving up Franzi. Anna soon realises that her new husband isn’t the least bit interested in her. Somehow she must find a way to attract his interest and she calls on an unexpected ally. 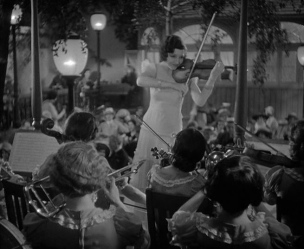 The world Lubitsch celebrates in his musicals had already ceased to exist when he made them. It is clear that Lubitsch regards this is as something of a tragedy. The Europe of the Belle Epoque that was swept away by the First World War was in some ways the highest point European civilisation ever reached. By 1931 it was already the stuff of legend, a vanished golden age. The magic of Hollywood, and the famous Lubitsch Touch, brought that world to life again on the screen. The results are visually dazzling.

Maurice Chevalier played the same role in all the Lubitsch musicals he appeared in. It may well have been the only role he could play but it suited these musicals perfectly. Claudette Colbert makes a charming leading lady. In 1931 she was at her most vivacious, and her sexiest. The songs in this movie require no great musical talent and Colbert carries them off with ease. 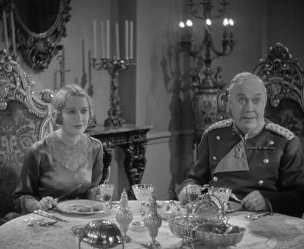 Miriam Hopkins is less at ease with the musical numbers but apart from that she does well and her transformation from dowdy princess to smouldering sex kitten is impressive.

For a musical this movie is actually a bit light on musical numbers, and those that are included aren’t particularly memorable. That seems to me to be a weakness of the Lubitsch musicals - a lack of catchy tunes.

My other issue with this movie is with the character of Niki, and indeed with all the characters Maurice Chevalier played for Lubitsch. We’re supposed to see Niki as the personification of European sophistication but if sophistication means having the morals of an alley cat then I’m glad I’m not sophisticated. The bottom line is that Niki is not cheerfully naughty; he’s an utter swine with no redeeming qualities and I found myself detesting him. And he’s smarmy with it. Both Franzi and the princess would have been much better off without him. 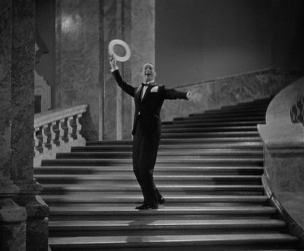 There’s certainly plenty of pre-code immorality in this film. We’re left in no doubt about the nature of Niki’s relationship with Franzi, and we’re equally left in no doubt that his marital problems with the Princess Anna are all about sex. If that’s the sort of thing that floats your boat then you’ll enjoy this movie. Personally I’m starting to find the pre-code celebration of immorality increasingly empty and tiresome.

This is one of the four movies in Criterion’s Eclipse boxed set of Lubitsch musicals. It’s a decent transfer but there are no extras.

The Smiling Lieutenant tries very hard to be fun but Maurice Chevalier is an actor whose charm all too quickly becomes irritating. The movie is worth seeing for Claudette Colbert at her sparkling best. Recommended, but only if you can endure Maurice Chevalier.
Posted by dfordoom at 11:36 PM