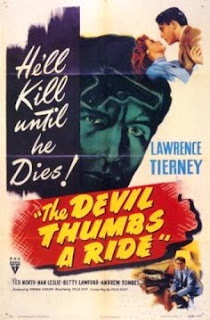 The Devil Thumbs a Ride is an amazingly pulpy ultra-cheap 1947 B-movie that is great fun if you accept it for what it is. It’s often described as a film noir but really it’s just your basic bad guy on the run movie.

Laurence Tierney is Steve Morgan, a bank robber who thumbs a lift with an incredibly dumb traveling salesman called Ferguson. Ferguson is your ultimate sap, frighteningly naive and good-natured. He’s on his way home to his wife after a party. Morgan persuades him to pick up a couple of girls at a filling station. Carol is a good girl who dreams of breaking into the movies, and she’s nearly as dumb as Ferguson. Her pal Agnes is a smart cookie, but she has Bad Girl written all over her.

The cops are more interested in their poker game than in apprehending criminals (and like so many cops in the 1940s American crime movies they’re also terrifyingly trigger-happy). Luckily a public-spirited gas station attendant is on hand to help track down the bad guy. Only in B-movies like this do the cops take along over-enthusiastic civilians when tracking down dangerous armed holdup men, but it adds to the pulpy fun. 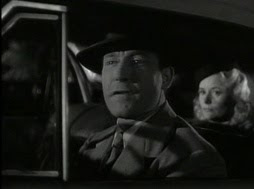 It has something of the film noir look, with quite a bit of the action taking place at night, although it doesn’t have the visual brilliance of the finest examples of film noir.

If you’re in the mood for an undemanding but entertaining cops and robbers B-movie that is unashamedly pulpy then The Devil Thumbs a Ride won’t let you down. It ain’t Citizen Kane, but it works for what it is.
Posted by dfordoom at 2:45 PM