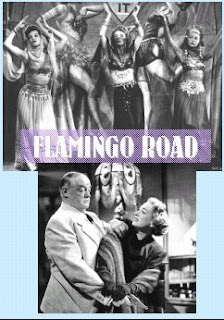 While it’s not usually thought of as an example of film noir, Flamingo Road (directed by Michael Curtiz and released in 1949) is actually more noir than many of the movies that have been issued on DVD recently with that label. It has the background of corruption and abuse of power, it’s really quite remarkably pessimistic and cynical about both American politics and human nature in general, and it has no less than three protagonists who could qualify as typical noir doomed heroes. And while it doesn’t have a big city setting, it shows us small-town life as something much more frightening than the mean streets of the big city. It’s very much a movie that looks at the dark side of the American Dream. If Sunset Boulevard and Mildred Pierce can be noir, then I think Flamingo Road can as well. I don’t think the fact that it’s also a romantic melodrama disqualifies it.

Joan Crawford is Lane Bellamy, a carnival dancer. She’s clearly led a colourful and not always entirely respectable life. When the carnival is closed down yet again she decides this life is no longer for her, and when she befriends deputy sheriff Fielding Carlisle of the town of Boldon and he offers to get her a regular job she ju 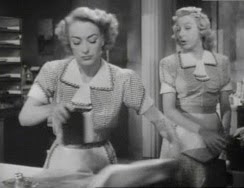 mps at the chance. It soon becomes clear that romance is blossoming between Fielding and Lane. Unfortunately Sheriff Titus Semple (Sydney Greenstreet) has other plans for Fielding. Titus isn’t just the sheriff; he runs Boldon. He runs the town as a private business and as a power base for his crooked political machinations, and he has plans to set Fielding up in the state legislature as his puppet.

These plans require Fielding to have a respectable wife, not a carnival dancer (to the small-minded inhabitants of the town not a carnival dancer is obviously regarded as not much better than a whore), so Titus decides to run Lane out of town. But Lane is not the kind of girl who takes kindly to being pushed around. She tends to push back. Hard. Lane is not only determined to stay put, she also intends to find herself on Flamingo Road one day, Flamingo Road being the street where the wealthy of Boldon live. Within a short time she has acquired a powerful and wealthy husband, and the stage is set for a showdown between her and Titus.

Crawford was really too old for this role, but she carries it off by sheer bravado. Sydney Greenstreet overacts outrageously and creates a memorably hateful screen 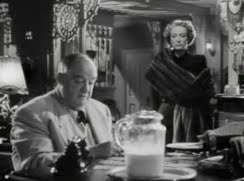 villain. Zachary Scott plays Fielding Carlisle, a basically decent but extremely weak man, a man who just can’t find either the courage or the motivation to stand up to the sheriff. His willingness to allow himself to be used by Titus makes him a typical noir doomed hero, a man slowly but surely sliding into degradation and ruin. The case of Dan Reynolds (played by David Brian) is slightly different, but in his own way he’s another doomed noir protagonist. He discovers that once you become involved in corrupt politics there’s no going back, you just have to live with the growing sense of self-disgust, and you can easily find yourself getting in deeper and deeper and without any means of escape.

Lane is the third noir protagonist, and she faces the prospect of destruction partly through simple bad luck but partly because she fails to understand just how high the stakes are in the game she is playing, and just how serious the consequences can be if she loses.

While it’s all very melodramatic and overheated it’s also highly entertaining, and a great example of the gritty Warner Brothers style at its best. A must for Joan Crawford fans, and well worth a look for any classic movie fan with a taste for the darker side of 1940s American cinema.
Posted by dfordoom at 2:51 AM