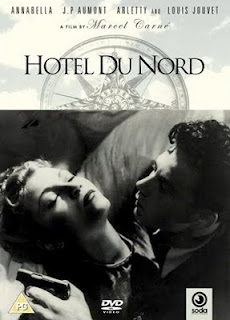 I’ve now seen quite a few examples of French film noir from the late 1930s, and I’m completely addicted. Hôtel du Nord, directed by Marcel Carné, is a perfect specimen.

French film noir is sometimes also referred to as poetic realism, and both terms are in their own ways perfectly appropriate. The feel is similar to, but by no means identical with, the later and more familiar American style of film noir.

The setting is a cheap hotel in Paris, the Hôtel du Nord. At the beginning we meet the owners, the permanent guests and regular customers, a motley but mostly good-hearted and fairly likeable assortment of low-grade workers, petty criminals, cops and whores.

And we meet the newest guests, Renée and Pierre, a young couple obviously very much in love who have chosen Room 16 in the Hôtel du Nord as the place in which to spend their last night on this Earth. Defeated by life, they have made a suicide pact, but events don’t turn out as they expected. What does happen has a profound and unexpected effect on Edmond, a rather dandified, somewhat 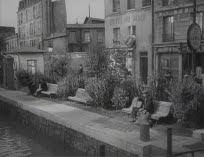 cold-blooded and very enigmatic ex-criminal who lives there with his prostitute girlfriend Raymonde.

Suicide, both active and passive, and other attempts at evading life are the principal themes of this movie. It has the characteristic film noir fatalism in spades, although oddly it manages to avoid being a mere wallowing in self-pity and bleakness. It’s both an affirmation of life and an acceptance of fate.

Louis Jouvet gives a subtle performance as Edmond, a character for who 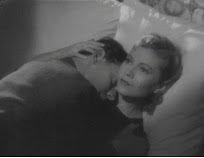 m we have little sympathy in the beginning. As the film progresses we come to understand him, as the character comes to understand himself and his destiny. The same change occurs in our perception of Jean-Pierre Aumont as Pierre and Pierre’s view of himself. In fact the key characters are all confronted by circumstances that turn out to be turning points in their lives and in their self-awareness. Annabella is sweetly vulnerable as Renée, while Arletty (there seem to have been a real fashion at this time for French actresses to have single-word names) is amusing and engaging as the cynical Raymonde.

A superb movie that works on both an intellectual and a emotional level. The ending is inevitable, which makes it all the more effective. Highly recommended.
Posted by dfordoom at 1:12 AM