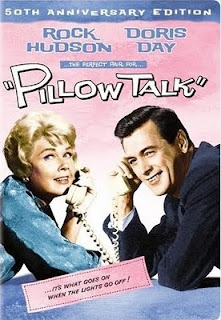 Molly Haskell’s comments on the television documentary From Weepies to Chick Flicks! persuaded me to do something I’ve been meaning to do for a while. To check oit the Doris Day-Rock Hudson comedies of the 50s. I decided that Pillow Talk would be as good a place as any to start.

And I have to admit Haskell is right again. Pillow Talk is absolutely delightful. She described it as pure sex, and that is indeed what it is. Yes it’s the 50s so the movie is careful to stay technically within the bounds of the Production Code. But it is in fact a sex comedy. And it’s surprisingly risque. I thought the British Carry On movies of the 60 had raised the double entendre to the status of an art form, but this movie has more double entendres than an of the Carry On films. It’s non-stop sexual innuendos.

Haskell also claimed that the most amusing way to view the film was by reversing the gender roles - seeing Doris Day as the butch one, and Rock Hudson as the femme one. And she’s right. What’s truly staggering is how much the movie plays on the sexual ambiguity of these two stars. Considering the efforts that Rock Hudson was making at the time to stay in the closet this was really quite a brave film for him to make. It even has him trying to entice Doris to seduce him by making her think he’s gay. And there’s nothing subtle about it - it’s difficult to believe that even the most innocent 1950s audience would have missed the gay jokes.

Even more surprising is the fact that Doris Day is actually quite sexy in this movie. The fact that she’s playing on her wholesome as freshly baked white bread image just makes it more sexy. She’s driving off for a weekend in the country with her new boyfriend, and we hear her singing on the soundtrack about, “I’ll be yours tonight, my darling, possess me.” Not exactly subtle.

There’s also a very clever use of the Cinemascope screen. It allows lots of split screen sequences. They’re something I generally don't like, but in this case they're used as a very witty way of getting Rock Hudson and Doris Day into bed together without actually getting them into bed together. They even manage to use the technique to get them into the bathtub together!

Yet another surprise is that this is an extremely funny movie. Both Hudson and Day have exquisite comic timing, and they can deliver potentially very risque dialogue with an incredibly light touch, while still making sure we pick up the sexual references. Tony Randall gives some fine support.

I knew I was going to enjoy the visual style of the movie as soon as I saw the words, “produced by Ross Hunter” in the credits. I’m learning more and more to appreciate the distinctive sumptuous and subtly camp visual style that seems to be a trademark of any movie that Hunter produced in the 50s. And this is no exception. It looks glorious, in a wonderfully excessive 1950s way. Ross Hunter movies have a way of making pastels seem deliriously decadent.

Pillow Talk is delightful naughty 1950s fun. It’s like 1950s cheesecake - it’s sexy but in an innocent kind of way that perversely makes it more sexy. It’s funny, it’s romantic, it’s over-the-top and I adored it.
Posted by dfordoom at 9:28 AM