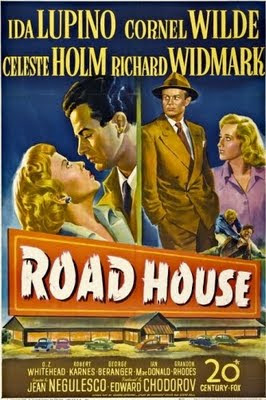 By 1947 Ida Lupino had grown tired of being in Bette Davis’s shadow at Warner Brothers and elected not to renew her contract with the studio. As a freelancer she still had mixed success in getting roles that interested her but in 1948 she leapt at the chance to play the female lead in Road House for Fox. The result was one of her best performances.

The movie had stated life as a treatment heavily influenced by James M. Cain. Darryl F. Zanuck hated it, regarding it as a sordid tale of unsympathetic losers, and insisted on major changes. The final screenplay was an intriguing mix of film noir and melodrama.

Jean Negulesco was to direct, with Lupino, Cornel Wilde and Richard Widmark playing the three corners of a classic romantic triangle. Celeste Holm as the obligatory good girl rounded off the cast. Pete Morgan (Cornel Wilde) manages an amazingly palatial road house near the Canadian border for his old buddy Jefty (Widmark). Jefty treats the road house as a kind of hobby combined with a means of attracting women. He hires the talent. He makes regular trips out of town and returns with a succession of female singers. The reactions of the staff lead us to believe that they have all been beautiful and that none of them have been overly talented, but the suspicion is that the last thing Jefty cares about is whether they can actually sing or not.

Jefty’s latest find is Lily (Lupino). Right from the start Jefty says that this one is different. And she is. She immediately makes it clear she isn’t going to be pushed about. She also rapidly establishes herself as the biggest attraction the road house has ever had. She admits she hasn’t got much of a voice, but she knows how to use it and she knows how to get an audience eating out of her hand. And Jefty’s reaction to his new chanteuse is different - he falls hopelessly in love with her. In fact he wants to marry her. It hasn’t occurred to Jefty that Lily might not be interested in marrying him. For all his bravado about his conquests it is clear that Jefty knows little or nothing about women. And despite their initial heated clashes she soon finds herself falling for Pete. Jefty does not take this well. Not well at all. He comes up with a twisted method of gaining his revenge, a method that will have both Pete and Lily dancing to his tune.

If there’s a potential weakness to this movie it’s the way the characters of both Lily and Jefty change dramatically halfway through. But then Lily has never really been in love before, and Jefty has never really been seriously thwarted before. In the hands of lesser talents these sudden dramatic changes might have undone the movie but Lupino and Widmark carry it off fairly convincingly. The three leads all do splendid jobs. Lily is set up to appear as the femme fatale but as the film progresses we realise that while she’s certainly hardboiled she isn’t destructive. At least no intentionally, although her arrival in town does create an explosive situation. Lupino did her own signing in this picture and while it’s not a big voice that she has she’s rather effective. It’s a voice that speaks of too much whiskey, too many cigarettes (Lupino literally smokes thousands of cigarettes during the course of this movie) and too many men. Lupino also gets the opportunity to show she could play a sexy glamour girl, and she does it extremely well.

Widmark gives one of his giggling psychopath performances but it’s also weirdly sympathetic. Jefty obviously has some major sexual and emotional issues. He’s really a little boy who has never had to grow up and he just isn’t equipped to deal with rejection.

The underrated Cornel Wilde also does a fine job. The important thing is that the attraction between Lily and Pete is totally believable. The small town setting provides a useful atmosphere of claustrophobia. The town seems to consist of little more than the road house, one hotel and a railway station. In a big city Lily and Pete could easily disappear but in a small town there’s nowhere to hide.

The road house itself dominates the movie. It’s difficult to believe that such a one-horse town could support such a lavish venue but that’s the magic of Hollywood. The art direction is impressive. Also impressive is Lupino’s wardrobe - those ludicrously sexy shorts, her improved bathing costume and the slinky dress she wears for her performances are all delightful.

The Fox DVD includes an enthusiastic audio commentary by Eddie Muller and Kim Morgan. Muller’s most interesting point was his theory that Jefty, despite his womanising reputation, is actually a virgin. The great thing about 1940s American movies is that the sexual aspects of the story can never be spelt out directly so there’s always a fascinating sexual ambiguity which woks particularly well in Road House.