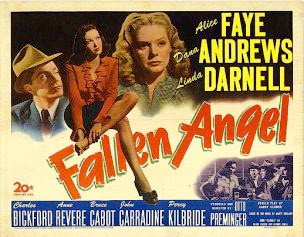 The success of Laura in 1944 established producer-director Otto Preminger’s Hollywood reputation. 20th Century-Fox had high hopes that Fallen Angel, made the following year, would repeat this success. Fallen Angel has never enjoyed the critical adulation of Laura but in its own way it’s just as interesting.

Preminger used more or less the same crew as on the earlier film and also the same male lead, Dana Andrews (Andrews eventually made five films for Preminger). This time Andrews is a drifter named Eric Stanton who is kicked off a bus when he doesn’t have the money to pay his fare. He was heading for San Francisco but now he’s stuck in a sleepy seaside town a hundred miles short of his destination, and penniless.

Stanton had been a successful publicist before gambling and love gone wrong caused him to hit the skids. But he still has a talent for selling people and when he discovers that the celebrated psychic Professor Madley (John Carradine) is about to hit town he sees a chance to make enough money to get him to San Francisco. He’ll drum up plenty of publicity and they can split the profits. But fate has decreed that Eric will not be leaving town after all. Fate, in the form of a woman. And what a woman. Eric is having a quiet cup of coffee in Pop’s Diner when Linda Darnell as Stella makes her spectacular entrance. She’s the kind of woman men notice. And men are instantly reduced to the status of helpless worshippers at the feet of this goddess of sex.

Every man in town wants Stella. But while Stella likes men well enough she’s not the kind of gal who jumps into bed with any good-looking guy who comes along. She makes it very clear that if a man wants to sleep with her he’d better be prepared to put a wedding ring on her finger. And until she has the ring he’s not even going to get to first base. And he’ll need more than just the dough for a ring - Stella wants a house and she wants nice things and she knows that with her looks she can get them. Given that Eric’s entire fortune amounts to the princely sum of one dollar Stella is not inclined to take too him seriously as a suitor. But Eric convinces her that he knows how to lay his hands on money, big money, and if she will just wait a week or so he’ll be able go give her everything she dreams of.

How is Eric going to get his hands on this bankroll? That’s where June Mills (Alice Faye) comes in. June and her sister Clara have a great deal of money. June is a very respectable woman. She plays the organ in the local church, she doesn’t smoke or drink, and her experience of men is non-existent. She’s just what Eric is looking for - a repressed wealthy spinster. He will turn on his very considerable charm and the rest will be easy. But of course it isn’t so easy. Sweeping June off her feet is no problem, and getting her to the altar also presents no difficulties, but before Eric has a chance to put the rest of his plan into operation he finds himself a murder suspect. A dead woman, a very shaky alibi, a suspicious cop who dislikes him, it all adds up to a sticky situation for Eric. The fact that he arrived in town as a penniless drifter isn’t likely to help his case either.

This is, like all of Preminger’s noirs, a complex movie that gets more complex the more you think about it. All of Preminger’s noirs repay repeated viewings. In this case we have three lead characters none of whom are simple villains, victims or heroes. Even where we seem to have a straightforward contrast between darkness and light it turns out that what we really have are shades of grey. At first glance the dark-haired sexy bad girl (Stella) and the blonde virginal good girl (June) seem like a very old Hollywood cliché. But Preminger presents this cliché in an ironic manner. Is Stella really a bad girl? She won’t have sex with a man until he marries her, she won’t go out with married men. And she never lies to men. She tells them the score right from the start. She might be somewhat mercenary, but that could just as easily be seen as being sensible. Stella knows that money is no guarantee of a happy marriage, but she has no doubt that it sure does help. It’s difficult to disagree with her. Stella has a face and a body that make men do crazy things, but if a moth gets burned by a candle is that the candle’s fault?

Even more interesting is the way June is presented. As Eddie Muller points out in his commentary track, Preminger and his cinematographer Joseph LaShelle always show us June bathed in light, rather like a saint. Again Preminger’s intentions are undoubtedly at least partly ironic. If Stella’s problem is too much sexuality, June’s problem is that he sexuality is unhealthily underdeveloped. If Stella could use some of June’s virtue there’s no question that June could use some of Stella’s wickedness. And June comes to realise this. Eric is a multi-layered character as well. He’s cynical and ruthless on the surface but underneath he’s really basically a decent man who has lost his way. Dana Andrews always gave fine performances for Preminger and this is no exception. Alice Faye was bitterly disappointed in this film and there are many who see her as the weak link in the acting department. She probably should have read the script more carefully - playing the good girl is always a thankless task and when you’re playing opposite a bad girl who is a decade younger than you and as smoking hot as Linda Darnell you’re bound to get overshadowed. In fact her performance works well within the context of the film but of course it wasn’t going to do much for her career. She didn’t make another film for sixteen years.

Linda Darnell is pure sex but she also proves herself to be a capable actress. It’s just that she’s so sexy it’s difficult to concentrate on her acting.

Preminger is in top form, giving full rein to his fondness for long takes and for elaborate tracking shots. These techniques are never intrusive. Preminger’s genius was to be stylish without calling attention to the fact.

The Region 1 DVD includes an entertaining commentary track by Eddie Muller and Dana Andrews’ daughter. As is the case with other Fox Film Noir DVD release the picture quality is superb. An underrated movie and definitely one to buy. This is a movie you’ll want to watch more than once.
Posted by dfordoom at 6:51 PM