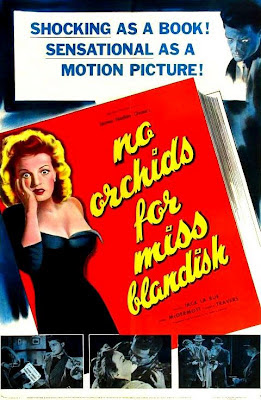 No Orchids For Miss Blandish is a real oddity, a British attempt to make an American gagster film. It’s both a failure and a success. The American setting is totally unconvincing but it still manages to be a highly entertaining and surprisingly brutal crime thriller with a definite film noir tinge.

It’s based on the 1939 novel of the same name by the British thriller writer James Hadley Chase. He decided to write an American gangster novel although his knowledge of American gangsters (and America in general) was derived entirely from his reading of American pulp crime fiction. It was an enormous success and launched his long and lucrative literary career. The 1948 film adaptation suffers from the same fault - this is an America of the imagination, an America that is a reflection of Hollywood crime movies. Everything about the American setting is subtly wrong. Or sometimes not so subtly wrong! Sid James’ American accent has to be heard to be believed. The actors are English and the accents are embarrassingly phony. But this movie simply doesn’t care. It races along with so much energy and enthusiasm that you end up not caring about such details either. In fact it’s part of the movie’s strange fascination.

It all starts with three punks trying to pull off a daring jewel theft. Miss Blandish (Linden Travers) is a fabulously wealthy heiress who owns jewels worth $100,000 and these punks have found out she’s going to be travelling to the country with her boyfriend with the jewel on her. Ambushing them up in their car and stealing the jewels should be dead easy. In fact the robbery ends with three people dead. The surviving thief gets the jewels, and he gets Miss Blandish. So far so good, but then he runs foul of the notorious Grisson gang.

Now mobster and gambling joint operator Slim Grisson (Jack La Rue) has the girl and the rocks. The gang figures this is a lucky break - her father will pay a huge random to get her back. what they don’t know is that Slim Grisson has been madly in love with Miss Blandish for a long time. His unrequited love takes an unexpected turn when she falls in love with him as well. He’s a violent ruthless gangster and that’s just the sort of man she has been waiting for all her life. As the plot progresses, so does the body count. I lost count of the number of corpses. By the standards of 1940s British movies No Orchids For Miss Blandish is astonishingly (and quite graphically) violent. I have no idea how this movie got past the strict British censors. The idea seems to have been to make a movie that would be more hardboiled, more violent and more sexy than contemporary Hollywood crime films. The level of violence outraged British critics at the time.

There’s some terrific hardboiled dialogue. It might not always be authentically American but it’s still vastly entertaining. The acting is excellent if you discount the accents. Jack La Rue is the only American in the cast. He’s a poor man’s Humphrey Bogart but he’s still pretty good. Walter Crisham is wonderful as his sadistic henchman Eddie. MacDonald Parke is memorably creepy as Doc, a struck-off doctor turned smooth hoodlum. Lilli Molnar joins in the scenery-chewing as Ma Grisson and Hugh McDermott is great fun as the gun-toting reporter. The casting of Sid James as a hardbitten New York bartender lends the movie a rather surreal touch.

There are surprising hints of sleaze, very unusual in a British movie of this period. The night-club scenes are quite well-mounted although the songs are fairly forgettable. The budget must have been reasonably substantial and technically the movie is impressive enough. St John Legh Clowes wrote and directed the film and he was clearly a believer in keeping the action moving along as rapidly as possible. It’s an approach that works for me. The Region 2 DVD from Simply Media is barebones but otherwise more than satisfactory. It’s also been released in Region 1 by VCI.

This movie is like no other British crime movie of its era, a strange but very entertaining concoction and definitely worth a look.
Posted by dfordoom at 9:24 PM