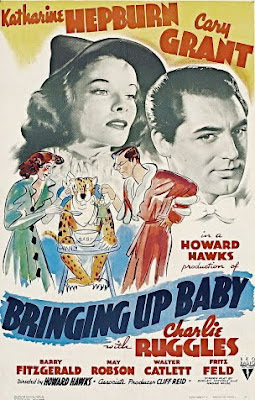 Bringing Up Baby was only modestly successful on its original release in 1938 but went on to become one of the best-loved of all screwball comedies. I’ve always loved this film and it still stands up as well as ever.

David Huxley (Cary Grant) is a palaeontologist. He needs one more bone to complete the four-year restoration of a brontosaurus. He also needs $1 million for his museum. Now the final bone has been located and it looks like a donor with the million dollars has been found as well. And he’s about to be married. Everything is going just swimmingly. All he needs to do is to play a pleasant round of golf with the lawyer representing the donor and everything should be all set. What could possibly go wrong in a game of golf? The answer is, plenty. He encounters Susan (Katharine Hepburn) on the golf course and everything becomes a nightmare of chaos. Susan is a very nice person but chaos is her constant companion. First she wrecks his car, then he finds himself aiding and abetting her to steal another car, accompanied by Baby. Baby is her leopard. He’s a very friendly leopard but David doesn’t even cope well with housecats and small dogs, much less leopards. And Susan manages to get involved in another traffic accident and that costs him $150 for the two swans that Baby subsequently eats. And the chaos has only just started.

This was Howard Hawks’ second screwball comedy, his first being the very successful Twentieth Century in 1934. Hawks proved to be one of the masters of this genre and Bringing Up Baby sees him at the top of his game. The pacing, as always in a Hawks comedy, is relentless. There’s plenty of snappy dialogue. Most importantly there are not just crazy situations, but crazy situations that pay off in terms of laughs.

There’s an an abundance of fine character actors in supporting roles. Cary Grant had scored a major hit the year before in The Awful Truth, establishing him in the screwball comedy genre. Bringing Up Baby sees him playing a role rather different from any he’d played before as the mild-manner bespectacled scientist. The big surprise is Katharine Hepburn. This is her most delightful role. She’s charming and likeable and as Hawks himself explained it’s a role that could have been irritating but never is. Susan is always scheming - she took one look at David and decided he was the man for her - but she’s kind of vulnerable as well in a way you don’t expect Hepburn to be. She’s also very funny.
She also seems to be quite comfortable playing scenes with the leopard! While in some scenes it’s obvious that rear projection is being used it’s also obvious in other scenes that she’s petting and playing with an actual leopard. Hawks demonstrates the clear superiority of directors of the classical age of Hollywood over the directors of today, with technique being used to advance the plot and establish the characters rather than to show off his cleverness.

The region 4 DVD includes a commentary track by Peter Bogdanovich. It’s typical of his commentaries - informative, amusing and affectionate and very enthusiastic. Bogdanovich knew Hawks and drew on interviews with the director for the commentary. Enormous fun from start to finish. One of the three or four best screwball comedies ever made and Katharine Hepburn’s finest moment. At a time when she was was ironically regarded as being box-office poison (which may have accounted for the movie’s relative lack of success at the time) she was actually at the peak of her form. A must-see movie.
Posted by dfordoom at 10:08 PM