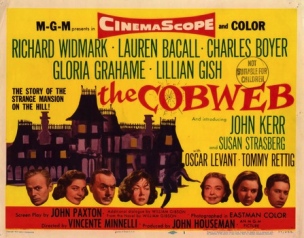 Hollywood in the 40s and 50s made many attempts to deal with the subject of psychiatry. One of the most entertaining is MGM’s 1955 effort, The Cobweb.

Vincente Minnelli directed. Minnelli is (quite rightly) revered as one of the masters of the musical genre but he deserves to be equally well remembered for his melodramas. And The Cobweb is mostly certainly a melodrama.

The Cobweb deals with one of the most important challenges faced by psychiatry in the 1950s - interior design. Yes folks, this is the epic Battle of the Drapes.

Dr Stewart McIver (Richard Widmark) is the head doctor at an exclusive mental hospital, Castle House. McIver believes passionately in patient self-government. The patients, through the Patients’ Committee, should make as many of the their own decisions as possible. And no decision could be more vital than the choice of the new curtains for the library.

The activities director, Meg Rinehart (Lauren Bacall) comes up with a brilliant plan - the patients will make the drapes themselves. One of the patients, Stevie, is an artist who’s had a nervous breakdown and thinks his work is futile. If they can get him to design the drapes it will help to snap him out of his mood of hopelessness.

Unfortunately the hospital’s financial manager, Victoria Inch (Lillian Gish), has already decided to order the curtains from a local company. She’s just interested in getting the cheapest deal. Meanwhile Dr McIver’s wife Karen (Gloria Grahame) has become involved in the drama as well - she wants to order fancy drapes from Chicago.

The drama of the drapes triggers off huge power struggles within the hospital. The medical director, Dr Devanal (Charles Boyer), supports Miss Inch. He has given up most of his responsibilities to Dr McIver. He signed a contract with McIver that gave McIver most of the powers he had previously wielded. Devanal was once a brilliant young psychiatrist. Now he’s burnt out and spends his time drinking and chasing women. The Battle of the Drapes will give him his last chance to reassert his authority and put Dr McIver in his place.

The curtains become a symbol for whatever it is that everyone in the hospital wants. For Dr Devanal it’s a chance to regain his power. For Dr McIver it’s a chance to show that his theory of patient self-government is viable. For Miss Inch it’s an opportunity to assert her own power. For Karen McIver it’s the opportunity to revitalise her flagging marriage.  For Meg Rinehart it’s part of reconnecting with people again, after the loss of her husband and son in a car accident.

For the patients it’s a symbol as well. For Mr Holcomb it’s the chance to assert his position as chairman of the Patients’ Committee. For Stevie it’s the chance to revive his career as an artist. For Mr Capp (Oscar Levant) the whole drama reinforces his cynicism about life. For agoraphobic Sue (Susan Strasberg) it’s the chance to help Stevie, with whom she’s fallen in love.

In any battle there are casualties, and the Battle of the Drapes is no exception. This is a battle in which no quarter will be given. To the victors will go the spoils; for the losers there is only the bitterness of defeat.

This is a melodrama but it is also a black comedy, and a very funny one. And it’s also a satire on psychiatry. The psychiatrists claim to be able to cure others but they can’t even get their own lives in order. At one point Stevie tells Karen McIver that he can’t tell the patients from the doctors in this madhouse. Karen tells him that it’s easy - the patients get better.

Richard Widmark is surprisingly good as the well-intentioned Dr McIver. Charles Boyer is effective as a man who has lost everything but his pride and he is about to lose that as well. This was Oscar Levant’s last film and this performance was a high note on which to go out. John Kerr is also good as Stevie. Lauren Bacall gives a moving performance as a woman who desperately needs to rejoin the human race and open herself up to her feelings again. Unfortunately when her emotions are reawakened she chooses an inappropriate object, Dr McIver. Look our for Fay Wray in a small role.

The outstanding performance, as so often, comes from Gloria Grahame. She’s all frustrated emotions and even more frustrated sexuality. In almost every scene she is hot and sweaty and behaves like a female cat on heat. This has an effect on almost every male except her husband.

The Cobweb is a wild ride through the madhouse of psychiatry. It’s very funny, very camp and generally enormous fun. Minnelli always approached melodrama seriously. No matter how crazy these people are, both the patients and the doctors, their problems are real to them. The situations are crazy, with people getting outrageously worked up over curtains, but do get obsessed with things as silly as this. There are no villains in this film. People behave badly, but they have their reasons and they are not motivated by malice. As usually happens in real life, chaos is caused by people who are pursuing ends that seem quite reasonable to them even if they appear bizarre to outsiders. The Cobweb is enormous fun and is very highly recommended.