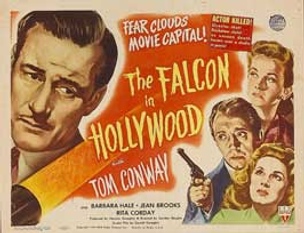 The Falcon in Hollywood was the tenth of RKO’s successful B-movie series featuring the suave amateur sleuth The Falcon. It’s a decent little 1944 release crime thriller with the Hollywood setting adding some further interest.

By this time Tom Conway had taken over the role from his brother George Sanders. Conway would star in no less than ten Falcon films. 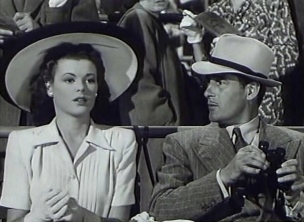 Tom Lawrence, AKA The Falcon, is enjoying a relaxing day at the races when he unexpectedly finds himself involved in a murder case. It starts innocently enough, with a young woman taking another woman’s purse by mistake. Lawrence pursues her in a cab. The cab is driven by Billie Atkins (Veda Ann Borg), who ends up tagging along with Lawrence for the rest of the movie, assuming the role of his comic sidekick.

The cab pursuit ends in a movie studio, and in an empty sound stage where Lawrence discovers a body. The body then disappears but Lawrence knows it must be on the studio lot somewhere. 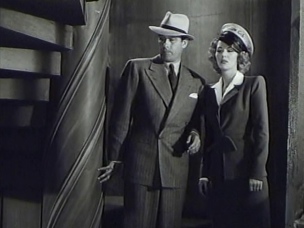 The Falcon finds himself caught up in the production of Alec Hoffman’s latest movie at Sunset Studios. It’s a project that seems to have been born under a singularly unlucky star. Everything that could go wrong in the making of a movie has gone wrong. The producer, Martin Dwyer, is becoming increasingly desperate. And now the lead actor has been murdered. For the body that Lawrence found was that of Tom Miles, the star of the picture. There are so many jealousies and intrigues surrounding the movie that just about anybody could have been the murderer. Big-time gambler Louie Buchanan and his girlfriend Peggy Callahan, an actress, are also mixed up in the dealings surrounding the movie although The Falcon is not quite sure yet exactly where they fit in.

Tom Conway was not quite the actor his brother George Sanders was but it’s a role that suited him well and he gives his usual reliable performance. Veda Ann Borg handles her comic relief duties adroitly enough. She manages not to be irritating, which is really as much as you can ask for in that type of role. 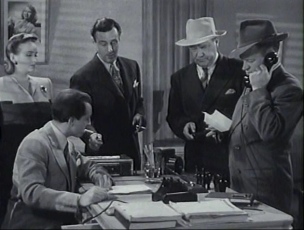 Barbara Hale is very good as Peggy Callahan, one of the movie’s three potential femmes fatales. Another is Lili D’Allio, an actress who lost out on the leading role in Hoffman’s picture. Rita Corday is slightly less assured in this role but she’s adequate. The third femme fatale is Tom Miles’ less-than-loving wife Roxanna (Jean Brooks). Brooks gives the role as much glamour and mystery as she’s capable of.

Director Gordon Douglas had a very long career. He was a capable journeyman director. This movie doesn’t really require anything more than that and Douglas gets the job done. The most essential thing in any B-movie is the pacing - that’s the element that is always most likely to be the weakness of a B-movie. The Falcon in Hollywood has no problems in that area, moving along at a brisk pace throughout its modest 67 minute running time. 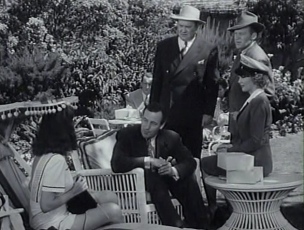 The Falcon in Hollywood is available on DVD in DVD from the Warner Archive series (it's in the second of their Falcon boxed sets). The version I saw was screened by TCM. It was a pretty decent print.

This is a good solid little B-movie that doesn’t try to be anything more than that. If you’re a fan of 40s Hollywood crime B-movies there’s no reason why you wouldn’t enjoy it.
Posted by dfordoom at 10:54 PM