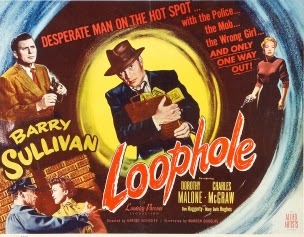 When Monogram Pictures rebranded themselves as Allied Artists and starting making slightly up-market B-pictures (which they described as B-plus pictures) they produced some quite decent crime movies, including Loophole in 1954.

Loophole lacks a film noir visual style but it does have a story arc with some elements of noir to it although basically it’s a Hitchcock-style “wrong man” movie. Mike Donovan (Barry Sullivan) is chief teller at a bank in Hollywood. He has a nice house and a lovely wife and his life is pretty good. Pretty good, up until the Friday when the bank inspectors arrive. 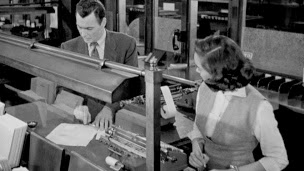 The unlucky teller from whose cash drawer he has lifted the 50 grand is Mike Donovan. At the end of the day when he realises he is $50,000 short he panics. He doesn’t tell anybody about the missing money until Monday morning. Naturally Donovan finds himself the obvious suspect. The police investigation uncovers no evidence of his guilt and he isn’t charged but of course his career at the bank is over. 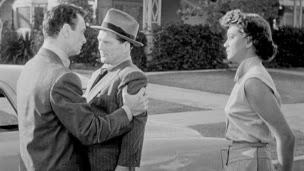 But Gus Slavin (Charles McGraw) doesn’t believe Donovan’s story. Slavin is an ex-cop now working as an investigator for the bonding company that is going to have to reimburse the money to the bank. Slavin starts a one-man crusade to prove that Mike Donovan really is the thief. Slavin’s idea is that Donovan is sitting tight, not touching the money until the heat is off. He thinks that if he can get Donovan fired from every job he gets he will eventually lead Slavin to the money.

Donovan meanwhile is working to clear his name by catching the real bank robber. He gets some assistance from the police, but neither Donovan nor the cops can find any leads. And meanwhile Gus Slavin’s campaign of persecution continues. Donovan’s wife Ruthie (Dorothy Malone) stands by him but things are getting pretty tough for the Donovans. And then finally Donovan stumbles upon what might prove to be the vital lead.

This is a movie that is light on action, relying mostly on suspense as Donovan keeps getting close to finding the real robber but without realising how close he is.

The movie has to rely a good deal on the actors and fortunately they’re very solid. Mike Donovan is a man pushed close to desperation but who refuses to give in and Barry Sullivan’s performance is nicely judged - not too overtly emotional but we’re aware of his frustration and his anguish. Charles McGraw is excellent as the dogged Gus Slavin. His methods are ruthless to an extreme and there are times when the audience is going to hate him but he’s not really a bad guy. He just happens to be absolutely convinced that Donovan is guilty. He’s not evil but he is dangerously obsessive and unwilling to admit the possibility he might be mistaken. McGraw really steals the picture. If there’s a character in this movie who represents the hero with a fatal weakness it’s Gus Slavin rather than Mike Donovan. 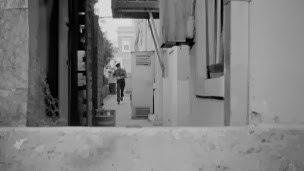 Dorothy Malone is very good as the loyal wife who knows that she has to keep herself from breaking because she’s all Mike has. Mary Beth Hughes is excellent as Vera, a blonde from Hell who fulfills the femme fatale role superbly (as this underrated actress did in several other similar roles).

Harold D. Schuster’s career as a director wasn’t particularly distinguished but he does a fine workmanlike job, maintaining the tension and keeping the pacing taut. Warren Douglas’s screenplay skillfully keeps teasing the viewer as Donovan keeps just missing out on finding the man he needs to find.

The Warner Archive made-on-demand DVD is absolutely barebones but it’s a good transfer.

Loophole is fundamentally a movie about human weakness. The entire plot is driven by a series of mistakes that characters make, mistakes that reflect everyday human flaws rather than evil. There’s no truly evil character in the movie, except perhaps Vera although even she is driven by greed, a common enough failing. Mostly the characters are just real people with real weaknesses. This psychological subtlety lifts this movie above the general run of B noirs. A well-crafted and effective movie. Highly recommended.
Posted by dfordoom at 11:33 PM