Margaret Hallam is awaiting execution for the poisoning murder of her husband. Her cousin Simon Gale (Dennis Price) is a District Commissioner in Uganda. He had heard nothing about the case until his return to England on leave a week before the scheduled execution.

Simon is sure that Margaret is innocent and he is equally sure that he can prove it. He has no actual qualifications as a detective but being a District Commissioner in Uganda he has had experience in administering justice and he has the boundless confidence of the men who built the British Empire.

Margaret’s step-daughter Jill Hallam (Rona Anderson) has stood by Margaret and is eager to help Simon to prove her innocence and to find her father’s actual killer.

It soon becomes apparent that just about everybody in the village wanted to see Jill’s father dead. He was an unpleasant man who derived pleasure from the sufferings of others. When it comes to suspects Simon is faced by an embarrassment of riches. 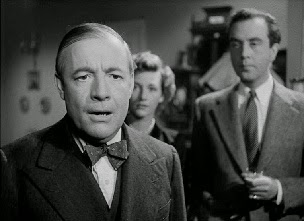 It also soon becomes apparent that almost everybody in the village had some secret they were determined to keep, and that Jill’s father had a knack for discovering other people’s guilty secrets.

I had no great difficult guessing the killer’s identity. I always consider that if I can solve the mystery it’s probably not terribly difficult to solve, although in this case the script by Rex Rienits supplies plentiful red herrings. The screenplay finishes with the thoroughly traditional gathering of the suspects to hear the detective announce the murderer’s identity. 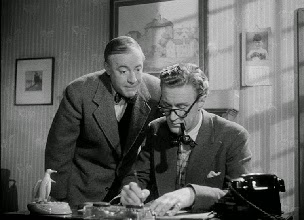 Margaret Hallam is a rather colourless character and we only get to see her in prison after her arrest. As a result we don’t really get to know her very well and that makes it that much more difficult to feel any great degree of empathy for her.

Dennis Price makes an engaging amateur sleuth and what he lacks in experience he makes up for in energy and enthusiasm. Ronald Howard is charming as always as the local doctor who knows a few secrets of his own. 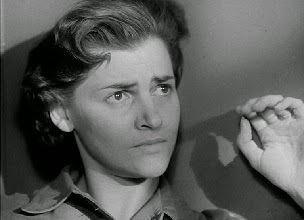 This is a movie from a time when murder was a much more civilised business than it is today. Murderers could be relied upon to know how to behave in social situations. You could invite a murderer to tea without having to worry that he or she would commit any  embarrassing social indiscretions. In fact, apart from their habit of killing people, murderers were generally quite decent chaps. This rather genteel approach to murder makes a refreshing change from the crassness and squalor of modern crime movies. 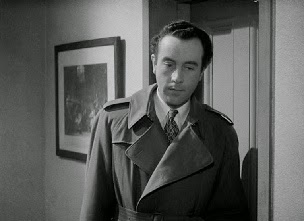 Network DVD have done a fine job with this release. The transfer is a good one and while there are few extras (just a trailer and a few stills) the very reasonable price makes this DVD very good value,

Noose for a Lady is best summed up as a competent film offering reasonably good entertainment. If you enjoy traditional English murder mysteries you should be well satisfied. Recommended.