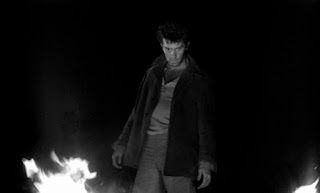 October Moth is included in Network’s Edgar Wallace Mysteries: Volume 1 DVD boxed set. The set includes half a dozen out of the forty-seven low-budget British mystery thrillers based on Edgar Wallace stories made at Merton Park Studios for Anglo-Amalgamated at the tail end of the 50s and the beginning of the 60s. Edited versions of these movies were screened on American TV as the Edgar Wallace Mystery Theatre but they were released theatrically in Britain.

October Moth is however a bit of a ring-in - it wasn’t made at Merton Park, it wasn’t released by Anglo-Amalgamated and it isn’t based on an Edgar Wallace story. Network have for some curious reason decided to include it as an extra on this set, which was rather nice of them since it’s not a bad little movie. It’s a psychological thriller of the sort that the British did supremely well in this period, with a bit of a film noir-esque feel to it. 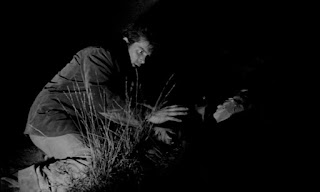 Polly (Lana Morris) lives on an isolated and very primitive farm with her brother Finlay (Lee Patterson). Finlay is seriously crazy but mostly he’s harmless. At least he’s harmless when he doesn’t manage to convince himself that Pa is coming back. Pa was a violent drunk who made the lives of both his wife and their children a living Hell. He’s dead now, but the trouble is that Finlay has never understood this - he still thinks Pa is likely to return at any moment. In fact in some ways he hopes that Pa does come back - if he does he intends to kill him.

Finlay has a habit of wandering about by himself after dark, and getting himself into trouble. He has a fascination with moths, and with fire. Now he’s managed to get himself into a real scrape, having accidentally caused a car accident. The woman driver is injured and Finlay brings her back to the farm. That would be fine except that he’s convinced that the woman is his mother (which of course she isn’t since his mother is dead as well). Now Polly faces a tricky situation. She has to persuade Finlay to let her get help for the woman, which Finlay is unwilling to do because he thinks his Ma is going to be taken away from him. Usually Polly can handle Finlay but in this case his delusions have taken such a firm hold that he’s quite unmanageable. And he has a loaded gun and he’s waiting for an opportunity to shoot Pa. 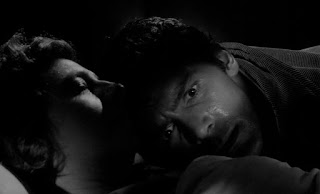 The arrival of Tom, a telephone linesman (played by Peter Dyneley who is better remembered as the voice of Jeff Tracy in Thunderbirds), might provide Polly with a chance to get medical treatment for the injured woman. Or it might just make a tense and dangerous situation even more explosive.

This was John Kruse’s only directing gig. Kruse had a fairly impressive career as a writer, mostly for television although he also wrote a few features including the underrated psychological thriller Revenge (1971). Kruse also wrote the original screenplay for October Moth. 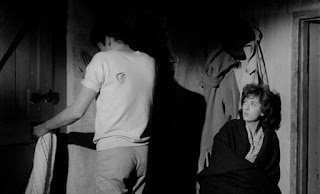 October Moth takes place almost entirely at night, providing the opportunity for the effective use of shadows to enhance the paranoid atmosphere. For a low-budget feature it’s visually quite impressive.

Canadian-born Lee Patterson made a lot of B-pictures in Britain in the 50s. October Moth gives him a real acting challenge and he does a fine job - he’s able to make Finlay both scary-crazy and tragic-pathetic and do it quite convincingly. Lana Morris’s career started promisingly but stardom eluded her, which is a pity as on the evidence of this film she was a fine actress.

Psychological thrillers are most likely to go off the rails when they try to offer explanations for the craziness of the protagonists. In this case the explanation is kept fairly simple and it comes across as perfectly plausible. 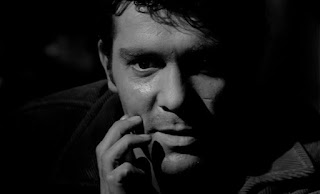 Despite the obscurity of this movie Network have managed to unearth an exceptionally good print. The anamorphic transfer is superb.

October Moth might be a low-key low-budget thriller but it’s certainly not lacking in psychological drama and nail-biting suspense. We know that the story is likely to end unhappily but we can’t be sure which of the characters might come to a tragic end. In the event the ending manages to pack the required punch. A fine taut atmospheric little thriller. Highly recommended.
Posted by dfordoom at 12:52 PM