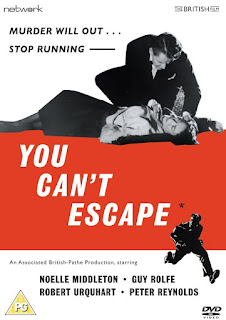 You Can’t Escape is a 1956 British suspense thriller released by Associated British-Pathé that takes what could have been a routine story idea and gives it a couple of interesting and original twists. The result is quite entertaining. I won’t spoil the movie by revealing these twists or giving any clues as to how it all plays out.

Peter Darwin (Robert Urquhart) is a successful novelist who saves the life of heiress Kay March (Noelle Middleton) when her plane cracks up on landing. Peter is a charming well-educated young man and it isn’t long before romance is blossoming. Everything is going just swimmingly until Peter’s old flame Claire Segar shows up and gives Peter the good news that he’s about to become a dad. Only Peter doesn’t see this as good news at all. His engagement to Kay March has already been announced and Peter has no desire to see his future happiness thwarted by an old discarded girlfriend. They quarrel and Claire is killed.

Claire’s death is an accident. Obviously the sensible thing to do would be to notify the police. It would be inconvenient and the inquest might be embarrassing but it was after all an accident. Of course if characters in suspense movies did the sensible thing in such situations we’d have very few suspense movies. Peter does what any self-respecting character in a movie would do. He buries the body and hopes it will never be discovered.

Surprisingly Kay gets herself involved in this mess very early on and although she knows it’s stupid she is persuaded to do something very foolish. 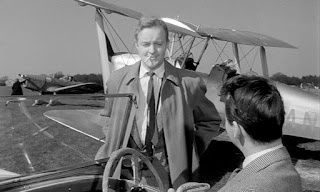 Of course we know that Peter’s foolproof plan for hiding the body is going to come unstuck and that he’s going to find himself in all sorts of difficulties. Everything that could go wrong does go wrong.

To add a further complication there’s an old friend of Claire’s, a Dr Anstruther (Guy Rolfe), who seems likely to cause some problems. There’s also Rodney Nixon (Peter Reynolds), a rather disreputable freelance journalist with a nose for scandal. Then there’s the local archaeological society, who decide to do a dig in a spot that could prove slightly awkward for Peter. Not to mention poachers and village policemen who seem to keep turning up in distressingly inconvenient places. 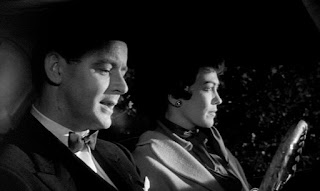 Apart from the plot twists what makes this movie more interesting than most is that Peter is  an intriguingly complex character who doesn’t behave the way the initial setup would lead us to believe he will.

There’s also a very slight resemblance to Hitchcock’s Suspicion - we have a heroine who isn’t quite sure how far she should believe the hero. Peter Darwin is charming and likeable and seems like the sort of young man who would make an ideal husband - but is he really all he seems to be? The relationship between Peter and Kay doesn’t quite follow the pattern we might expect either. 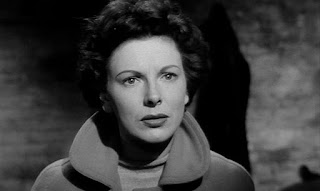 Fine performances from all the principals make a major contribution to the movie’s success. Robert Urquhart as Peter is nicely ambiguous, Peter Reynolds is deliciously smooth and mercenary as the journalist and Noelle Middleton is an effectively sympathetic emotionally torn heroine. Guy Rolfe gets top billing although he’s really a supporting player but he’s very solid.

Director Wilfred Eades had a very short career in film (in fact just two directing credits) followed by a rather short career in television. There’s certainly nothing wrong with the job he does here. Robert Hall and Doreen Montgomery provide a clever well-constructed screenplay. 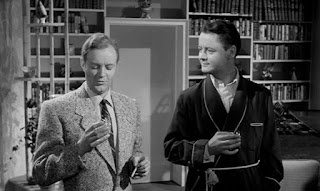 Like most British thrillers and mysteries of this era this is a very well-made movie that turns out to be better than we expect it to be.

The correct aspect aspect ratio of this film is open to debate. It was shot in 1.33:1 but distributed in two versions - one in that aspect ratio and another matted to 1.66:1 for cinemas equipped for widescreen exhibition. In other words both aspect ratios can be considered to be perfectly correct representations of the original theatrical release. Network have solved this problem for their DVD release by offering both versions. Since the widescreen version involves a loss of some picture information I elected to watch the 1.33:1 version but really it’s a matter of personal taste. What matters is that the transfers are extremely good.

You Can’t Escape is an absorbing and well-crafted suspense thriller that provides fine entertainment. Highly recommended.