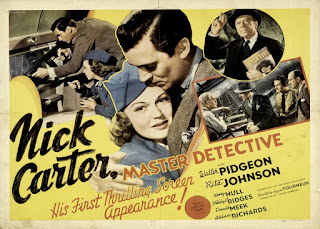 Nick Carter, Master Detective was made in 1939 and was the first of three Nick Carter B-pictures made by MGM with Walter Pidgeon in the starring role.

Nick Carter had started as a detective hero in dime novels in the 1880s and subsequently featured in several thousand stories over the course of more than a century. The character underwent several metamorphoses, being at times a Sherlock Holmes-style detective, a pulp superhero, a hard-boiled detective and eventually the hero of several hundred spy novels. This movie has chosen to make him a fairly routine private detective. 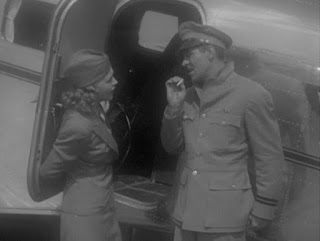 Nick Carter has been assigned to investigate industrial espionage at an aircraft plant and since the plant is producing the prototype for a highly advanced new fighter it’s possible that this is more than just routine industrial espionage-foreign spies may be at work. Security at the aircraft factory is so tight that there is no way that blueprints could possibly be smuggled out, but they are being smuggled out.

Aircraft play a major part throughout the story and in fact the movie kicks off with an excellent aerial action sequence which ends with plucky stewardess Lou Farnsby (Rita Johnson) taking over the controls of the airliner. She will provide the movie’s love interest but Nick suspects she may actually be involved in the spy ring. But then Nick is inclined to suspect everybody. 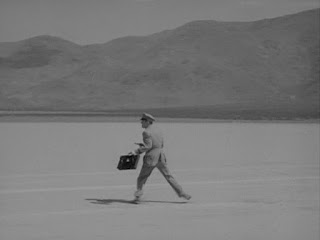 Bertram Millhauser’s screnplay provides the film with a pretty decent plot and the method by which the spy ring operates is quite clever. The tone is fairly light-hearted but mostly it avoids the danger of descending into silliness and it stays fairly tightly focused on the espionage plot. The dialogue doesn’t always have quite the zest one might have hoped for but it does have some amusing moments and on the whole the script serves the film fairly well.

One of the more notable things about these MGM programmers was that the first two were helmed by Jacques Tourneur. There are only a few signs of Tourneur’s later distinctiveness in Nick Carter, Master Detective but it’s already obvious that he was much more than just a competent director of B-pictures. The action sequences are very ambitious by B-movie standards and extremely well executed. They include some fine aerial action scenes. Process shots were obviously employed but they’re done very well. We don’t get any car chases but we do get chases involving aircraft, a speedboat and a large ship.

There are none of the classic night scenes of 1940s Tourneur movies but he does make very good use of fog, not just for atmosphere but to add mystery and excitement to the action scenes. It also has to be said that this film is remarkably well paced. 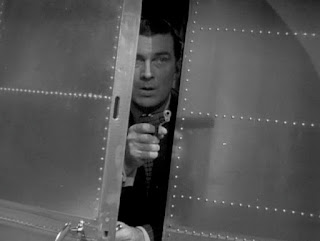 The fact that the literary versions of Nick Carter had been churned out by many different hack writers and that the character had undergone various changes means that unlike other heroes of B-picture series he did not really have a clearly established personality. This becomes a slight problem in the movie in that the hero does seem a bit generic. The most successful B-film mystery series were the ones that featured a colourful hero with a truly distinctive style - The Saint, Charlie Chan, Mr Moto, Sherlock Holmes and so on. MGM were clearly hoping to make Nick Carter an urbane Simon Templar-style hero but he lacks the wit and devil-may-care charm of The Saint and to be honest Walter Pidgeon just does not have the charisma of a George Sanders. Pidgeon’s performance is quite good and at times amusingly languid but it doesn’t quite have enough of a definite flavour.

Comic relief is provided by Donald Meek as Bartholomew the Bee Man. He’s not Carter’s sidekick but a beekeeper and would-be amateur detective. Carter has no desire whatsoever to have Bartholomew’s assistance but  he just keeps turning up and on occasions his bumbling efforts actually do help. As comic relief characters go he’s one of the best you’ll come across in B-pictures of this era and he is actually funny, and manages to be genuinely crazy rather than just foolish. 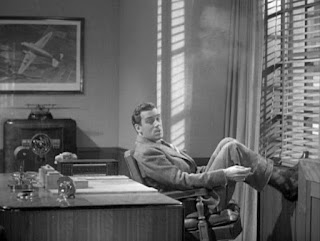 Rita Johnson is a competent female lead and the supporting cast is solid. Look out for Martin Kosleck, naturally playing a sinister foreigner who just has to be a spy! The chief bad guy is not an over-the-top villain but it’s his very calm and matter-of-fact evilness that makes him scary.

Nick Carter, Master Detective is an above-average B-movie of its era. It has a well-constructed plot, acceptable acting, more action scenes than was usual in such productions and in general it’s well-made and makes very enjoyable viewing. Highly recommended.
Posted by dfordoom at 10:30 PM