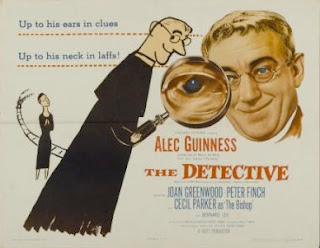 Father Brown (released in the US as The Detective) is a light-hearted 1954 British mystery based on the popular stories Father Brown detective stories by G. K. Chesterton. This was the second attempt to bring Chesterton’s priest detective to the big screen, an earlier adaptation having been made in 1934. The 1954 version stars Alec Guinness as the little priest-detective.

The movie is based on Chesterton’s story The Blue Cross, which introduced both Father Brown and Flambeau, although the story has been much expanded and embroidered.

Father Brown is a mild-mannered bumbling and apparently slightly dimwitted English Catholic priest who is also an enthusiastic amateur detective. Needless to say his dimwittedness is merely on the surface - he is in fact a very astute detective. 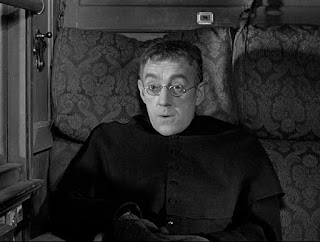 A very valuable cross has to be taken to France by Father Brown for a religious conference. Scotland Yard have made elaborate security arrangements with Inspector Valentine (Bernard Lee) being placed in charge. The security is necessary since the notorious thief Flambeau is known to be intending to steal the cross. Father Brown decides that the inspector’s security arrangements are worse than useless so he ignores them. His decision backfires but while the loss of the cross will be a serious matter Father Brown is more concerned with saving Flambeau from his career of crime. Since Flambeau has no desire to be saved and thoroughly enjoys his criminal life this will be quite a challenge.

Father Brown has to recover the cross, find Flambeau and persuade him to abandon crime and he has to keep Flambeau out of the hands of the police for long enough to allow him to achieve these objectives. Most of the film is therefore a double chase, with the little priest pursuing the master criminal while they are both being pursued by the police. 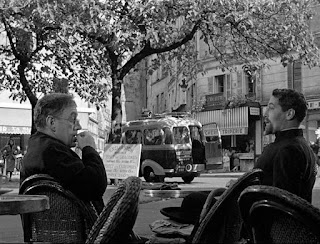 I’m not a great Alec Guinness fan and my concern with this movie is that he might overdo the comedy angle. Chesterton’s stories certainly contain a great deal of humour but they are also serious detective stories and they have moral, philosophical and spiritual dimensions as well. If the stories are played purely for comedy then they will miss the point. Guinness’s performance is better than I’d expected but at least some of my fears were realised - there really is too much emphasis on comedy.

Peter Finch is a surprisingly effective Flambeau, managing to be dashing and enigmatic with a hint of tragedy and also managing to be fairly convincingly Gallic. Bernard Lee played countless police inspectors during his career. He played such roles so often because he played them extremely well and his performance here is no exception. Joan Greenwood adds some glamour as an entirely unnecessary character named Lady Warren. 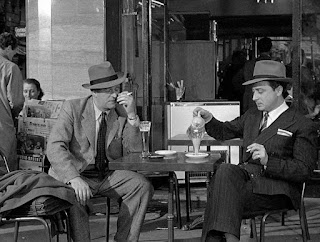 Director Robert Hamer had a flair for comedy (as he would demonstrate in School for Scoundrels) and his career was riding high at this time. Sadly it was not to last - alcoholism destroyed his marriage and his career and led to his early death in 1963. He handles things pretty well here.

The screenplay does at least try to preserve some of the intriguing mixture of elements that made Chesterton’s stories classics of their genre although we’re left not entirely convinced that Father Brown is the great detective he’s supposed to be (whereas in the original stories we are left in no doubt at all on that point). 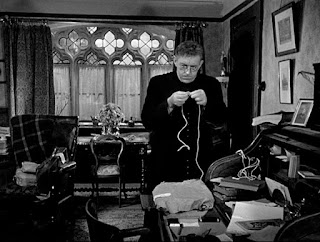 The tone does get more serious as the movie progresses and there are some attempts to explain Flambeau’s motivations.

If you want to see how it should have been done check out the superb 1974 British Father Brown TV series with Kenneth More giving an absolutely splendid performance in the title role.

Sony’s Region 2 DVD is barebones but the transfer is quite satisfactory and the price is very reasonable indeed.

For my tastes it focuses a little too much on comedy but Father Brown is still enjoyable enough and Alec Guinness fans won’t want to miss it. Recommended.
Posted by dfordoom at 9:31 PM