Suspected Person is a 1942 British crime thriller about American gangsters in London.

James Raynor (Clifford Evans) has double-crossed American mobsters Franklin (Robert Beatty) and Dolan (Eric Clavering) over a bank robbery. Raynor, an Englishman, had been working as a crime reporter in New York. Now Franklin and Dolan have figured out that Raynor was the one who pulled a fast one on them and that he has the fifty grand from the bank robbery. So they’re off to London to have a little talk with him, and maybe take him for a ride.

Scotland Yard knows the gangsters are on the way to England but Detective Inspector Thompson (David Farrar) has decided to let them into the country and keep an eye on them. He has a feeling they’ll lead him to the missing money, which will be a feather in his cap and be good for the prestige of the Yard. Detective Sergeant Saunders (William Hartnell) is not quite sure about all this - he thinks his boss might be trying to be a bit too subtle. 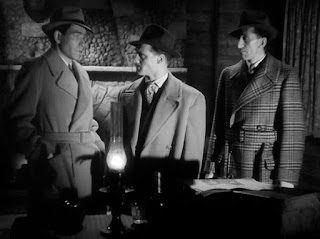 Thompson is trying to be very subtle. He goes undercover, taking a room at the hotel run by Raynor’s sister Joan (Patricia Roc). Raynor himself is trying to be even more clever, confident he can outwit Franklin and Dolan against whom he has a personal grudge. Raynor is playing a dangerous game and he may be endangering his girlfriend, night-club singer Carol Martin (Anne Firth).

So the plot is a double chase, with the American gangsters after Raynor while Inspector Thompson is after them.

Writer-director Lawrence Huntington had a long if rather obscure career in B-pictures before making the move to television in the late 50s. His script is routine but serviceable. His directing is rather flat-footed. This film’s major problem is that it never really develops any sense of urgency or excitement. 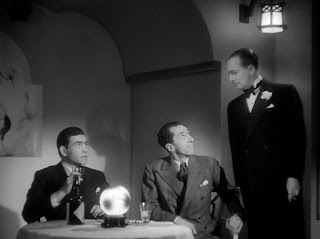 At one point the gangsters are pursuing Raynor on a train. It’s almost impossible to go wrong in a thriller when you have vital scenes set on a train but Huntington totally fails to take any advantage of the train setting and these scenes just don’t deliver the goods.

Another major problem is the casting. Clifford Evans is just the wrong actor for this role. He’s too genteel to be convincing as someone who worked as a New York City crime reporter and then tried to double-cross a couple of very hard-boiled American mobsters. His bland performance undermines the film’s credibility. 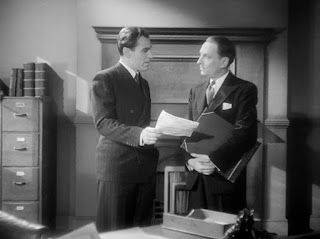 David Farrar does a very fine job in his supporting role as Inspector Thompson but he would really have been a much better choice to play Raynor.

Patricia Roc on the other hand is terrific as Joan Raynor - she’s pert and charming and her performance is totally convincing. She and David Farrar have the right chemistry to make their romantic sub-plot work.

William Hartnell was often used in comic relief roles but this time he plays it pretty straight. The witty interplay between Farrar and Hartnell is always delightful and in fact is the highlight of the movie.

This movie was released in mid-1942. With the US having just entered the war you'd expect a British movie made at that time to be quite pro-American but in fact the reverse is true. There are quite a few not-so-subtle digs at the corruption of the American criminal justice system and there’s a general attitude that American gangsters might think they’re tough but they’re no match for Scotland Yard, or for a quick-witted Englishman. 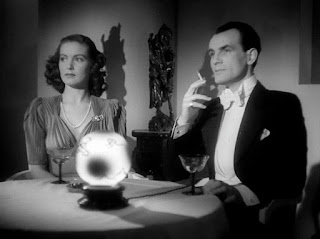 The British police in this movie have such contempt for American criminals that even though they have good reason for thinking that Franklin and Dolan might be armed when it comes to the final showdown they don’t even bother carrying firearms (which of course British police are quite entitled to do in such circumstances). The clear implication is that British policemen have no need to resort to such barbarisms just to deal with a couple of New York hoodlums. It’s also notable that although Inspector Thompson contacts the New York police he gets no help from them.

Network’s DVD release is stock-standard for this company - no extras apart from an image gallery but a very good transfer.

Suspected Person is not a terrible movie by any means. It’s just a very average B-movie that doesn’t quite succeed in generating any real tension. The excellent performances of David Farrar, Patricia Roc and William Hartnell are the main reasons for watching this one. Probably worth a rental.
Posted by dfordoom at 7:16 PM