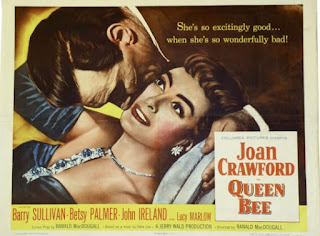 Queen Bee, released by Columbia in 1955, is an outrageously overheated but wonderfully entertaining melodrama with Joan Crawford delivering one of her most memorable performances.

The Phillips family are southern aristocracy, wealthy mill-owners with immense pride. Avery Phillips (Barry Sullivan) is the nominal head of the family. The actual head of the family is his wife Eva. Eva is no southern belle. She’s a Yankee, a fact that will turn out to be quite important.

Eva’s cousin Jennifer Stewart (Lucy Marlow) is the penniless poor relation who has been invited to stay. Eva’s explanation for this move is that she is lonely. We might be sceptical, but it might be true. Jennifer is a nice girl but hopelessly innocent and naïve. She is overwhelmed by Eva’s apparent kindness, and by her charm and glamour. 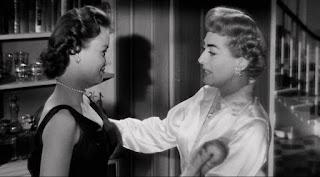 Nonetheless it soon becomes evident that all is not well in the Phillips household. Eva’s children have nightmares. Avery’s sister Carol is engaged to be married but is too scared to tell Eva. Avery is drunk most of the time. The man Carol is to marry is Judson Prentiss (John Ireland) and for a man soon to be married he seems irritable and morose.

Jennifer is naïve but she isn’t stupid and slowly she puts the pieces together. Carol had told her that Eva is like a queen bee who stings all her rivals to death and Jennifer begins to realise how true this is. Eva’s manipulations are breathtakingly blatant but they work because she knows what she wants and she will use any methods, any methods at all, to achieve her ends. At the moment her project is to prevent Carol’s marriage. Eva hopes to rekindle an old romance with Jud Prentiss. Whether she really wants Jud or whether she just wants him because Carol wants him is never made clear but given Eva’s personality both possibilities are plausible. And Eva has stolen other women’s men before. She likes doing that. It reassures her that she is irresistible to men. Especially now that the years are creeping up on her. 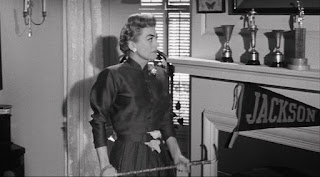 Of course Eva’s manipulations are going to lead to tragedy. The only question is, will there be any survivors by the time Eva has finished?

It’s an extraordinary performance by Crawford. She goes way over the top but she never loses control. Crawford understood melodrama and she knew exactly how far she could push a performance. She could push it very far indeed.

What’s interesting is that although Eva is one of the screen’s most horrifying monstrous women Crawford does show us the other side to the story. Eva has always felt that as a Yankee she was never going to be accepted, and not being as blue-blooded as the Phillips family made her even more of an outsider. She is a frightened lonely woman. She is terrified by the passing of the years and terrified of losing her power over men because that’s all she has. Crawford does not exactly make her sympathetic but at least we can understand how she became a monster and that makes her more human. And human monsters are more interesting than inhuman ones. 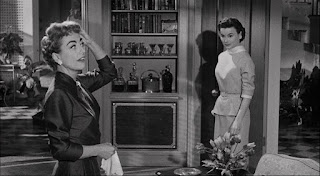 Barry Sullivan and John Ireland are both excellent as the two men who have been Eva’s playthings. They hate the way Eva plays with them but they don’t have the strength of character to do anything about it. They are weak men, but they are perhaps not entirely spineless. We have the feeling that if Eva keeps pushing she might push them into reclaiming their pride and taking a stand. It’s not a certainty, but it’s a possibility. Avery is a hopeless drunk but he has an odd streak of stubbornness.

Ranald MacDougall wrote and directed Queen Bee. As a director he’s no more than competent but as a writer he’s top notch. The script is peppered with deliciously bitchy dialogue and he clearly understands what melodrama is all about. 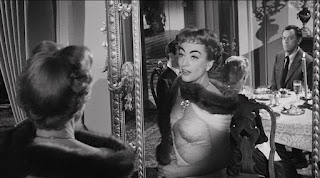 The Columbia DVD has no extras worth noting but it offers a fine anamorphic transfer.