All of the cheap Edgar Wallace movies turned out at Merton Park Studios in the early 60s are fun. The Sinister Man, released in 1961, is not just fun but it's also quite crazy.

It begins with the discovery of a body floating in the Thames. The body is that of Oxford academic Professor Raven and he has clearly been murdered. He had been the head of an archaeological research institute and when he disappeared the Kytang Wafers disappeared as well. The Kytang Wafers are three stones that had been fused together, containing inscriptions that may prove the existence of a very early Asian civilisation. The Kytang Wafers now have political importance as well since their existence is very inconvenient for one of the powerful neighbours of the small modern-day state of Kytang. That powerful neighbour has always argued that Kytang was never more than an insignificant province which should be re-absorbed as soon as possible. 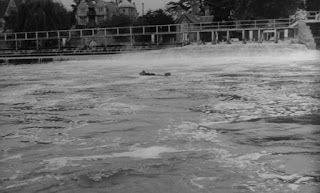 Scotland Yard is under pressure. The Kytang Embassy wants the Kytang Wafers found. The  members of the research institute seem to be the most likely suspects. Another murder follows and Superintendent Wills (John Bentley) now has another clue. It seems that both murders appear to have been committed by someone skilled in karate, the deadly forbidden form of judo. That casts suspicion on one member of the institute in particular, Johnny Choto (Ric Young). Johnny Choto is Japanese so he is probably a karate adept.

The mystery element doesn’t stay a mystery for long but that’s OK because after all this is an Edgar Wallace adaptation and Wallace was known as a writer of thrillers rather than of mysteries. 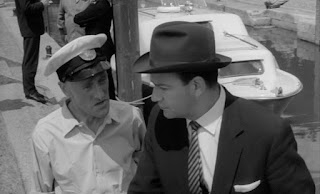 The budget was much too small for allow for any genuine action scenes but the climactic fight scene (which naturally involves karate) is enjoyable.

John Bentley was one of those reliable English actors who made a fine hero in his younger days (playing dashing figures like the Toff and Paul Temple) and made an equally fine policeman in middle age. Patrick Allen overacts enjoyably as American archaeologist Nelson Pollard (he’s a suspect because he was captured in the Korean War so he could have been brainwashed by the communists), as does John Glyn-Jones as the institute’s deputy director (he’s a suspect also since he’s a Czech and therefore could be a communist agent). William Gaunt (later better known for the TV series The Champions) as another institute member who could be a suspect since he’s involved in a romantic triangle isn’t given enough to do but he’s still very solid. 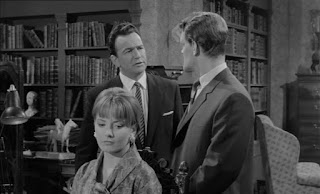 Any self-respecting research institute naturally has to include at least one beautiful young woman. In this case it’s Elsa Marlowe (Jacqueline Ellis). Her job seems to be pretty much confined to being charming and beautiful. It’s great to see a brief appearance late in the movie by the always entertaining Burt Kwouk.

Director Clive Donner had a very up-and-down career which included quite a few spectacular flops. His approach in this film is a little eccentric but it’s interesting. He comes up with some nice compositions and a few cool camera angles. 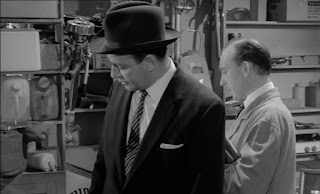 Robert Banks Stewart, later to achieve great success as a television writer, was responsible for the slightly quirky screenplay.

The Sinister Man isn’t exactly a good movie but it has plenty of energy and a few intriguingly odd moments. I found it to be strangely appealing. It’s very Edgar Wallace and it’s very B-movie. Recommended.
Posted by dfordoom at 11:17 AM