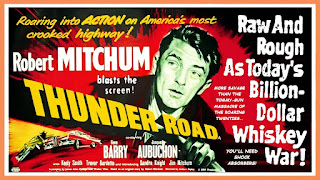 Thunder Road was very much a personal project for Robert Mitchum. He starred in it, he produced it, he wrote the story and he even co-wrote the songs. It was released by United Artists in 1958.

Mitchum plays Luke Doolin, a Korean War veteran who makes his living running illegal whiskey. It’s a small family business but Luke is finding himself squeezed by agents of the Treasury Department on one side and big-time gangsters on the other.

The action takes place in Harlan County in Tennessee, and illegal whiskey is the main industry in the county. These are hillbillies who have been distilling moonshine, and avoiding the revenue agents, for generations. It’s not just as profitable business. It’s part of their culture.

The transporters are guys like Luke, driving specially modified cars with racing engines and 250 gallon concealed tanks for the whiskey. 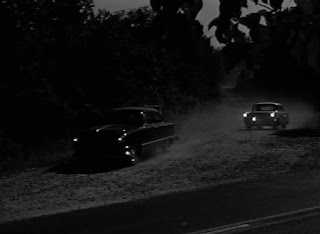 Carl Kogan (James Aubuchon) is a smooth but unscrupulous operator. He aims to control the whole illegal distilling business throughout the state. He aims to turn the operation into big business. He makes the moonshiners of the valley an offer he thinks they can’t refuse but he hasn’t taken account of Luke Doolin’s bloody-mindedness and intense dislike of being pushed around.

Luke’s charisma, resourcefulness and daring has made him the de facto leader of the illegal distillers in the valley. Luke certainly has guts. The question is whether his judgment is entirely sound. He doesn’t just refuse Kogan’s offer, he goes out of his way to antagonise and humiliate him. Kogan has a reputation for ruthlessness and one might think that it would have been wiser not to push him so far. But subtlety is not Luke’s style, and he possibly figures that if he refuses Kogan’s offer then Kogan is going to try to destroy him anyway so why bother refusing him politely? 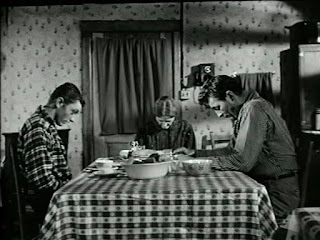 It’s clear from the start that this is a high stakes game. One whiskey runner is ambushed and killed early on. Revenue agents might be implacable enemies but they don’t do that sort of thing. It has to be Kogan. Then Luke has an encounter with a couple of hoods in a car. The encounter ends fatally for the hoods. Then things really get out of control. A Treasury agent is killed in a bungled attempt on Luke’s life. This is the one thing that everyone in Harlan County feared. If a federal agent gets killed the government tends to react in a rather extreme way. In this case they send 200 additional agents to Harlan County with orders to track down and destroy every single still.

Things are getting so grim that Luke’s Daddy decides it’s time to get out of the whiskery business, temporarily at least. Luke will make one last run and that will be it.

One of the cool things about a film noir-tinged 1958 movie is that you can’t be certain whether it’s going to have a downbeat ending or a happy ending. From the late 60s onwards movies started to become terribly predictable. You just know there’s going to be a nihilistic downbeat ending. But in 1958 there was no way to be sure which way a movie like this would go. And I’m certainly not going to tell you! 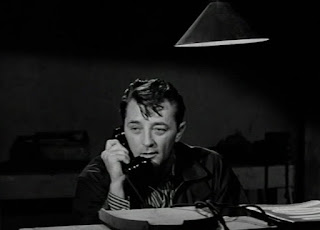 Thunder Road does have some definite claims to film noir status, and those claims rest to a large degree on Luke’s personality. Luke is the kind of guy who just cannot compromise. He’s a guy who is either going to smash his way to victory or destroy himself trying. He is wildly over-confident. He is used to winning, but now he’s facing tougher odds than ever before. He’s the kind of guy whose whole approach is likely to get him in trouble. He’s a nice guy and he’s fundamentally decent but those flaws could well be enough to make him a doomed film noir hero. He’s a man who is at least half-aware of being on a road to destruction. If Kogan doesn’t get him the Federal Government will. The smart thing to do would be to quit, but he just doesn’t know how to do that. It’s an ideal role for Mitchum, combining charisma, charm, sensitivity and fatalism.

Gene Barry (an actor I’ve always liked) plays Treasury Agent Troy Barrett. In this case Barrett doesn’t really care about Luke Doolin. It’s Carl Kogan he wants. Luke is a bit of a bad boy but Kogan is a gangster and a cold-blooded killer. Barrett’s problem is to try to persuade the moonshiners that this time he’s on their side. 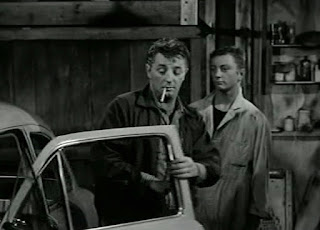 The illegal whiskey business isn’t just a criminal enterprise. For the people of communities like Harlan County it’s a kind of symbol. A symbol of resistance to intrusive governments. A symbol of a man’s freedom to live his life in his own way. A symbol of the right not to be a wage slave. And also a symbol of a traditional way of life. Apart from being in the illegal whiskey trade the people of Harlan County are law-abiding God-fearing folk. They just want to be left alone. But of course being left alone is not going to be an option.

Thunder Road is available on DVD in Regions 1 and 2 and there’s a U.S. Blu-Ray release as well. I caught the movie on cable TV so I can’t comment on the quality of those releases.

Thunder Road has no shortage of action. It was just about the first Hollywood move in which car chases were the main focus of the action, and those car chases are extremely well done. The film also benefits from lots of location shooting. This is a very entertaining mix of film noir and action movie, with some of the flavour of an exploitation movie as well. Highly recommended.
Posted by dfordoom at 11:17 PM