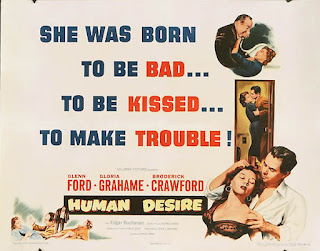 I decided to follow up Jean Renoir’s La Bête humaine (The Human Beast) by watching Fritz Lang’s American remake, Human Desire, released by Columbia in 1954. In this case it really is a remake, since Lang based his production on Renoir’s film, and not on Zola’s novel. In fact there’s speculation that Lang didn’t even bother to read the novel!

The first surprise is that Lang opens his movie in exactly the same way. The opening of Renoir’s movie is a visual tour-de-force, an extended dialogue-free sequence involving  trains and railway tracks and setting up the relationship of the hero to the trains he loves so much. The images are magnificent, and for Lang to open his film in exactly the same way was a very brave thing to do. While it’s not quite as impressive, Lang gets away with it. 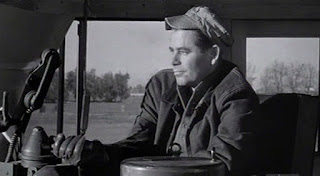 The stories in the two films run mostly in parallel until the ending. Jeff (Glenn Ford) has returned from the Korean War to his job as a train engineer. He becomes involved with the wife (Gloria Grahame) of the assistant yard manager, and a witness to what appears to be a murder. 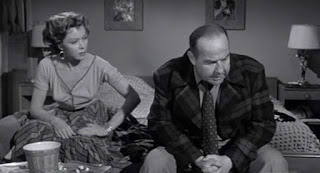 Lang’s task was much more difficult than Renoir’s, hampered as he was by the demands of the Hays Office and of a studio anxious to offend nobody and to provide a straightforward and if possible happy ending.  Given those constraints Lang does a reasonably good job.

The biggest change is in the personality of the hero. Jean Gabin as Lantier has a darkness within him, but Lang admitted he was forced to make Jeff a much more conventional hero. Glenn Ford is no Jean Gabin anyway, but he has little to work with. In some ways that perhaps suited Lang’s purpose. It makes Jeff a complete victim of fate. 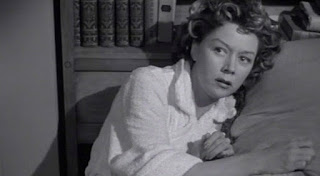 It also puts more pressure on Gloria Grahame. Her character has to bear most of the burden of the moral murkiness of the movie. In fact she becomes the central character, and her relationship with her husband (played by Broderick Crawford as a pathetic but nasty drunk) becomes more central as well. Jeff becomes more of an innocent bystander caught up in events he never quite comprehends (rather like Ray Milland’s character in Lang’s earlier and underrated Ministry of Fear).

Fortunately Grahame is  equal to the task. Her performance is so good that the viewer, like Jeff, is never quite sure how much of what she’s telling him is the complete truth, an embellished version of the truth, or complete fabrication. The frustrating thing for us, and for him, is that there is certainly a considerable element of truth in her story. 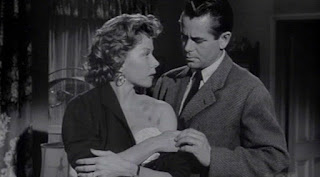 The most unfortunate thing about Human Desire is that the plot does follow that of La Bête humaine rather closely so comparisons are inevitable, and it has to be said that Renoir’s is the better and more complex film.

Lang’s movie though is Lang’s movie, not Renoir’s, it reflects Lang’s concerns, and if you’re prepared to judge it on its own merits it’s a fine example of late American film noir. Highly recommended.
Posted by dfordoom at 9:37 PM