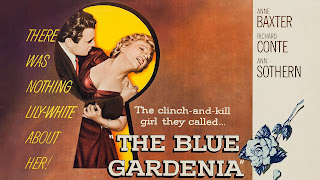 Three girls work as telephone operators and share an apartment. Norah (Anne Baxter) has a boyfriend who is currently fighting in Korea. Norah is rather a romantic soul. It’s her birthday and she’s going to spend it with her boyfriend, even though he can’t be there. She’s going to pretend he’s there. She’s cooked a special dinner and she’s bought champagne. She’s had a letter from hi but she’s been saving that up to read after she’s opened the champagne. Maybe it’s just as well she had that champagne since the letter is to give her the good news that her boyfriend has met a fabulous hot nurse named Angela  in Korea and they’re madly in love and they’re going to get married so he’s dumping Norah but he wishes her all the best. Norah is pretty cut up about this and she does something very uncharacteristic - she accepts a date with Harry Prebble (Raymond Burr). 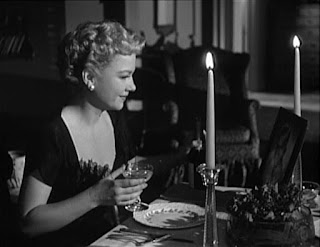 Prebble is an artist. He’s the kind of artist who does pictures of pretty girls in skimpy clothing. He’s a notorious womaniser. He’s also terribly obvious. Any girl who goes out with Harry Prebble knows what to expect. Norah however is not exactly thinking straight. She just knows she wants to go out and have fun and forget that awful letter. Harry is a sleaze but he’s fun if a girl is in the mood for that sort of thing and Norah is in the mood for anything to dull the pain. And after the first half dozen formidably strong cocktails she’s not feeling any pain at all.

Norah has an impressive hangover the next day. She has no idea what happened the night before. She’s more than a little disturbed when she finds out that what happened the night before is that Harry Prebble got murdered. The unknown blonde with whom  he was seen dining at the Blue Gardenia Cafe is the prime suspect. The unknown blonde is of course Norah. 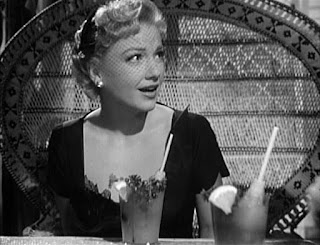 The story is all very straightforward and obvious. Sooner or later some girl was going to put up a fight to defend her virtue and Harry was going to get clobbered with a poker. It’s the kind of thing that happens every day. Which of course immediately makes us suspicious. If the case was really that straightforward Fritz Lang would never have bothered to make the damned movie so there has to be more to it.

Columnist Casey Mayo (Richard Conte) doesn’t know yet if the case is clear-cut or not but one thing he does know - this is the sort of story that sells newspapers. Glamour, sex, murder. And there’s the vital clue - the blue gardenia found at the murder scene. That gives him the hook that will make this a really big story - he christens the unknown murderess the Blue Gardenia. In his column he tells this unknown murderess that he and his newspaper will help her if she goes to them rather than the cops.

Richard Conte was one of those actors who could play a chilling villain or a very likeable hero with equal facility. That’s useful in a film like this, where things seem obvious on the surface but maybe they aren’t so obvious. Casey Mayo is a likeable kind of guy but he’s a newspaper reporter so he has no morals whatsoever. 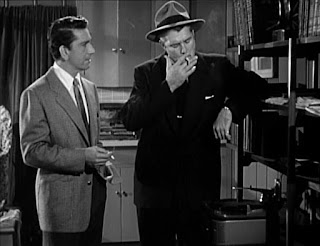 This is a pretty disillusioned little film. The guy who seems like he’s being cast in the hero rôle would sell his soul for a good story. His handling of the Blue Gardenia story is crass and cynical. And the public laps it up. The cops don’t like it but if it helps to find the killer it’s OK by them - it’s not like they actually care about people.

Anne Baxter made a very big splash in All About Eve but of course Bette Davis made an even bigger splash in that movie. Baxter’s career overall didn’t amount to as much as one might have expected.

George Reeves (TV’s Superman) is OK as the cop in charge of the case. Ann Sothern is also good as Norah’s good-natured room-mate Crystal. 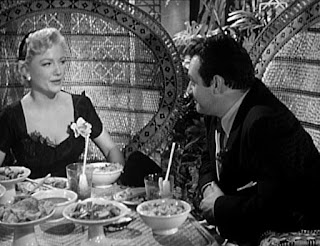 A lot of people will violently disagree with me but I think Fritz Lang’s American movies are better than his German movies. The German movies have brilliance and were clearly made by a man touched with greatness but he’d been allowed to do pretty much anything he wanted to and they’re also undisciplined and a little on the self-indulgent side. You couldn’t get away with that in Hollywood in those days. Lang was smart and he was a fast learner and he was adaptable. He adapted very quickly. His Hollywood movies are very tight and very disciplined. They’re very focused. Lang may not have liked submitting to that kind of discipline but it actually worked in his favour. The Blue Gardenia is typical. There are no wasted scenes.

The movie was shot in black-and-white and in the 1.33:1 aspect ratio. This movie doesn’t have the obvious noir visual signatures. This was 1953 and that obvious style was going out of fashion in favour of location shooting and a self-consciously “realist” style. Nicholas Musuraca was the cinematographer so it still looks very impressive.

When analysing Lang’s movies it’s always worth bearing in mind his Catholicism. He can be dark but the idea of life being meaningless was anathema to Lang. Lang also believed very strongly in free will and the possibility of redemption. Whether his films offer a happy ending or a downbeat ending (and I’m not going to tell you if this film has a happy ending or not) the apparent meaning of the ending of a Lang film is not always the real meaning. Lang was one of the masters of film noir but the paradox is that film noir is fundamentally pessimistic and Lang was fundamentally optimistic, although not in a naïve manner.

The Blue Gardenia is generally regarded as minor Lang but it’s actually a very well-crafted little movie. Highly recommended.
Posted by dfordoom at 12:37 AM