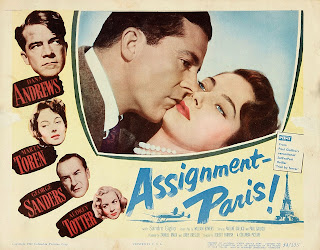 Assignment: Paris is a 1952 Cold War spy thriller from Columbia.

Dana Andrews stars as ace New York Herald Tribune reporter Jimmy Race. He’s covering the trial of an American named Anderson convicted of espionage in Hungary. The newspaper’s Paris bureau chief Nick Strang (George Sanders) wants to tread carefully. He has the crazy old-fashioned idea that newspapers should stick to the facts. There’s no evidence that Anderson was wrongly convicted so it would be wrong to make such a claim. Jimmy Race has no time for outdated ideas like journalistic ethics. He doesn’t really care if Anderson is guilty or not. Jimmy just wants to lead an anti-communist crusade. It’s fairly clear that the viewer is expected to be on Jimmy’s side.

Of course there’s a romantic complication. Nick and glamorous reporter Jeanne Moray (Märta Torén) are in love but Jimmy’s personal morals are on a par with his professional ethics so he sets out to steal Nick’s girl. Jeanne is French so naturally she was in the Resistance during the war. 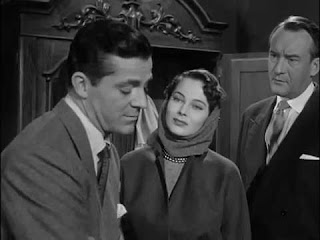 Jimmy is sent to Budapest to replace the Tribune’s correspondent there. He makes contact with the Underground and he attracts some unfavourable attention from the secret police. They think he’s there as a spy and they arrest him. Of course by making contact with the Underground he really is playing at espionage and the Hungarians are therefore perfectly justified in arresting him but the movie glosses over such inconvenient details.

Now Nick and Jeanne have to find a way to get Jimmy out.

There’s not a great deal of excitement to be had here. Mostly it’s predictable and the characters are not interesting enough to persuade us to care very much what happens to them. 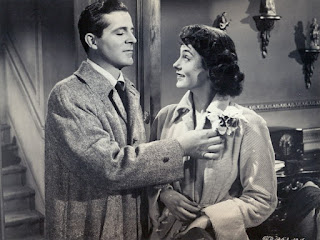 I like Dana Andrews as an actor but he gives a one-note performance here, playing Jimmy as a rude arrogant blowhard. Märta Torén is adequate but rather on the dull side. George Sanders is miscast as a hard-driving editor and is largely wasted anyway. Since the Hungarians are communists they’re all played as sinister cardboard cutout bad guys. There’s not a character in this movie who isn’t a cliché.

Assignment: Paris is included in the nine-movie Noir Archive Blu-Ray set from Kit Parker Films. Its claim to being film noir thematically are non-existent, and visually they’re very very thin. The attempts to make us believe we’re in Paris and Budapest are about as convincing as you'd expect in a Hollywood movie of this era. Robbert Parish directed and you can see why his career was less than stellar. Supposedly Phil Karlson also took a hand which I guess gives it a very tenuous connection to film noir. 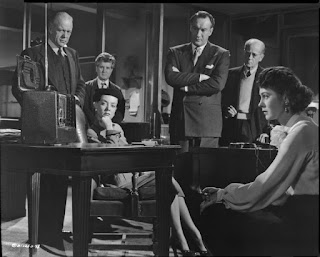 As a spy story it’s too slow and lacking in real suspense. There are a couple of scenes that are reasonably atmospheric and competently executed, especially towards the end.

The most interesting thing in the movie is seeing the bad guys editing audio tape by hand, using scissors.

This is not so much a spy thriller as an out-and-out propaganda film, and a fairly clumsy one. The hero is meant to be noble and brave although to me he seems to be an obnoxious jerk. The other good guys are very heroic. The bad guys are totally evil but not in an interesting way. The screenplay by William Bowers is heavy-handed. A newspaper story needs to be snappy and sparkling but this one fails to ignite. 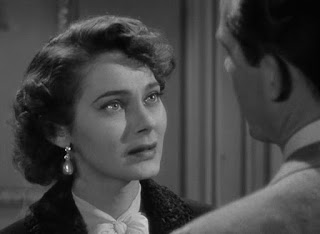 This Blu-Ray release is essentially a way to fit nine movies on just three discs. The transfer is basically DVD quality, but it’s good DVD quality. The black-and-white image quality is good. Sound quality is fine. There are no extras.

As anti-communist hysteria movies go Assignment: Paris isn’t outrageous enough to be fun. It’s fairly stodgy. Even Dana Andrews completists might want to think twice about bothering with this one.

I honestly cannot recommend this film, even as a rental.
Posted by dfordoom at 8:57 PM