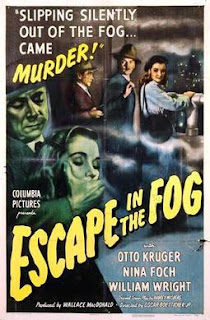 Escape in the Fog is an odd little Columbia spy thriller B-feature released in 1945.

Nina Foch plays Eileen Carr, a military nurse who has had a crack-up and has been honourably discharged as a result. She has disturbing dreams. So do lots of people. But Eileen’s dreams come true! She dreams about a man, a man she has never seen before, being attacked on a bridge. And the next day she meets the man. The man is Barry Malcolm (William Wright) and for both of them it’s love at first. And he does get attacked on a bridge, exactly as happened in the dream.

Barry Malcolm is a Federal Agent and he’s just been assigned to a vital mission, to deliver important papers to a contact in Hong Kong. The papers concern American plans to attack Japanese forces in China. First he has to collect the papers in San Francisco. 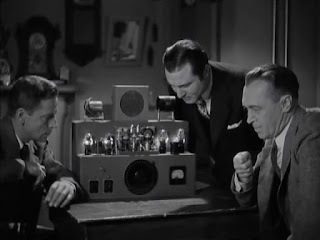 Unfortunately a sinister Nazi spy ring has found out about the mission. They intend to get the papers. Awkwardly for both the Nazis and Barry Malcolm the papers are now at the bottom of the bay after Malcolm threw them off a bridge.

He’s told Eileen about the mission and she’s playing amateur spy with enthusiasm but with mixed results. She naturally manages to get herself captured by the Nazi spies.

It all turns out to be a very conventional by-the-numbers spy flick. Sadly the potentially really interesting angles, just as Eileen’s talent for precognition, are not developed. The story at least moves along at a good pace. 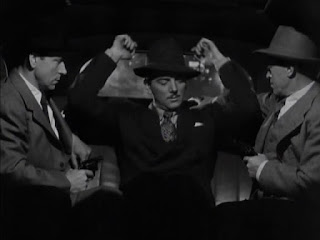 Nina Foch is quite adequate and very likeable as Eileen. William Wright, a now forgotten actor who died tragically young, is a perfectly serviceable hero. In fact he’s pretty good. Otto Kruger plays the enigmatic Paul Devon and does so effectively if predictably. There’s the expected conventional Nazi villain.

This was an early directorial effort by Budd Boetticher, later to gain fame as a director of westerns. This is very much a B-picture so he doesn’t get much opportunity to do anything clever but films like this were great training in getting on with a story without distracting the viewer with unnecessary padding. 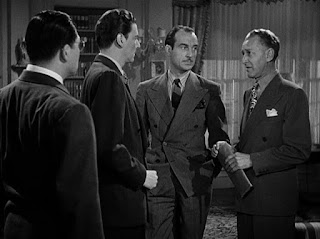 There was obviously no money for spectacular action set-pieces. The title does promise fog and there’s plenty of that - always a useful way of disguising a low budget. The fog is certainly used effectively. And Malcolm’s escape plan is very clever.

While it’s been released as part of a film noir set this movie has absolutely zero claims to being a film noir. It’s just a routine spy story. It’s a pity because the story could have been a lot more interesting if there’d been time to flesh it out and explore Eileen’s psychological quirks. You have to wonder if perhaps the script was intending to do this but the demands of B-film production resulted in the more interesting bits of the story being eliminated - why introduce the dream stuff if you’re not going to explain what’s going on in her head? 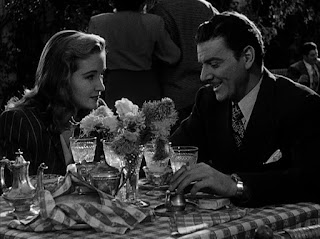 This movie is included in the three-disc nine-movie Blu-Ray set Noir Archive volume 1 from Kit Parker Films. The transfer is good if you don’t mind a bit of graininess (which is actually an asset in a movie of this type). The Blu-Ray release is just a way to pack lots of movies on just three discs. The image quality is good DVD quality. The packaging of the set is unbelievably shoddy - three discs all packed into in a two-disc case and not surprisingly not all the discs are playable.

This movie was also released individually on DVD in the Sony Choice Collection series but that edition might be hard to find now.

If you’re happy to accept it for what it is, a pure B-movie potboiler, then Escape in the Fog  offers undemanding but reasonably satisfying entertainment. It’s worth a rental.
Posted by dfordoom at 6:23 PM