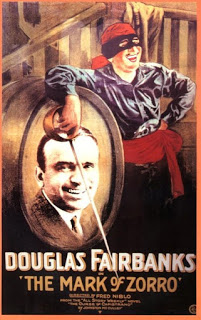 The Mark of Zorro was the first of Douglas Fairbanks’ big-budget swashbucklers, appearing in 1920. He’d already made many films, but this was the movie that cemented both his popularity at the time and his enduring legend.

Perhaps not the sort of thing you’d normally think of as a cult movie, but it’s pulpy adventure fun.

And if you enjoy the swashbuckling style of adventure movies, then this is a very good example of the breed.

The story has been told many times since in movies but this was in fact the first movie version of the tale. In the inhabitants of California, still under Spanish rule in the early 19th century, and suffering under the depredations of a corrupt governor and his equally crooked cronies. The native American population is being cruelly mistreated, while the Spanish landowners are being bled dry financially by exorbitant taxation. But a hero has appeared, a hero who defends the poor and fights against the governor and his troopers.This hero is known as Zorro, his true identity hidden behind a mask. 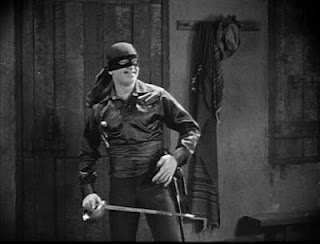 Of course we the viewers know from the outset that Zorro is in fact Don Diego, the apparently weak, foolish, rather fey and somewhat effeminate son of a wealthy landowner.

Don Diego’s father is trying to arrange a marriage for him, with Lolita Pulido. Lolita is the daughter of a neighbouring family of noble blood whose fortunes are in sad decline thanks to the outrageous taxation demands of the governor. Don Diego is attracted to Lolita but he cannot openly romance her since this would endanger the weak-willed and foolish image he has carefully built up as a cover. So he makes a fool of himself in front of her, but he returns later as Zorro as sweeps her off her feet. She despises the foppish Don Diego but she’s madly in love with the handsome and dashing Zorro.

Zorro’s plans is to encourage all the young Spanish blue-bloods, the caballeros, to join him  in a rebellion against the governor. What’s interesting is that this is to be a purely aristocratic rebellion. While one of Zorro’s grudges against the governor is his bad treatment of the Native Americans and the poor, it never occurs to our hero that such people should have the right, or might have the capacity, to fight for their own rights. The making and breaking of unjust governments is the province of the caballeros alone. 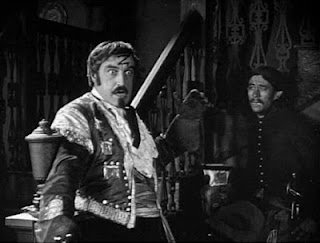 In a Fairbanks swashbuckler you expect spectacular stunts. And in this movie you certainly get them. Fairbanks did all his own stunts, partly for his own satisfaction and partly because he was simply a better stuntman than anyone else in Hollywood. There was probably nobody else who could have done some of his stunts.

There’s plenty of action, there’s romance, there’s a stirring story of the struggle against tyranny. It’s all highly entertaining, and it has that special Fairbanks magic that makes his swashbucklers somehow just that little bit better than anyone else’s. Nobody could do the likeable swaggering rogue better than Fairbanks. 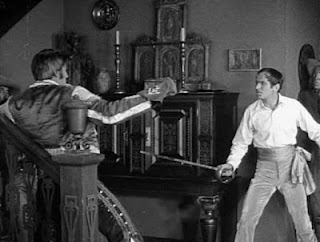 Fairbanks produced and co-wrote the movie, a practice he followed in all his great adventure movies of the silent era. The Mark of Zorro was based on The Curse of Capistrano, Johnston McCulley’s 1919 story which introduced Zorro to the world.

There have been various DVD releases. By the standards of silent movies The Mark of Zorro has survived in reasonable condition.

With this movie Fairbanks established the template for the swashbuckling action movie. The 1940 version with Tyrone Power is pretty good as well but the 1920 version of The Mark of Zorro is historically important as well as being outrageously entertaining. Highly recommended.
Posted by dfordoom at 9:23 PM