Murder in the Clouds is a 1934 aviation mystery thriller from First National Pictures (which was of course by that time a division of Warner Brothers).

Bob ‘Three Star’ Halsey (Lyle Talbot) is the ace pilot at Trans America Air Lines. He’s the source of constant exasperation to the airline boss Lackey. He drinks too much, gambles too much and gets into too many fights but there’s nothing Lackey can do about it - Three Star is just too good a pilot to fire.

Three Star’s girlfriend is Judy (Ann Dvorak), one of the airline’s stewardesses (yes I know we’re supposed to call them flight attendants these days but in 1934 they were stewardesses). Judy would marry Three Star in a minute if she could convince herself he would make a reliable husband but since she can’t convince herself of any such thing she’s waiting for a miracle that will turn him into husband material. One of the other pilots, George Wexley (Gordon Westcott), is kinda sweet on Judy as well. 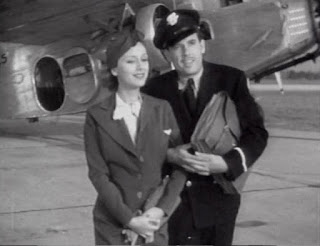 Now the airline has been given a vital job by the government - to fly a top scientist (who has invented a new military explosive) to an important meeting. They need the very best pilot for this job, and that means Three Star Halsey. But there’s a sinister plot afoot and Three Star isn’t going to make that flight. Wexley will make it instead.

That flight could be a flight to disaster. The scientist is carrying a cylinder of the new explosive and it’s obvious that bad guys, probably in cahoots with foreign spies, will stop at nothing to get it. There’s going to be murder and mayhem and Judy will get caught in the middle. And Three Star will do anything to save his girl. 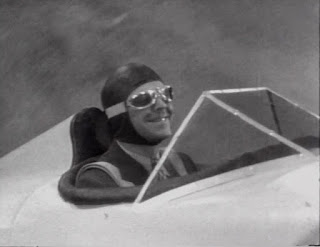 D. Ross Lederman was a typical journeyman director of B-features, especially westerns. Not a great director but extremely competent when it came to action scenes and a man who understood the importance of pacing. Future studio big shot Dore Schary co-wrote the screenplay.

Lyle Talbot, always a wonderfully entertaining actor, is perfectly cast as the brave but irresponsible Three Star. Talbot has the charisma to pull off a rôle like this without any trouble at all. Ann Dvorak is also very good as the good-natured but slightly cynical Judy. There was always just a slight edge of hysteria to Dvorak’s performances but that’s what made her an interesting actress. You always think she might be about to cry, or scream, or kiss someone, or shoot someone. Judy is more than just the love interest for the hero, as she gets to prove she can be pretty resourceful as well. 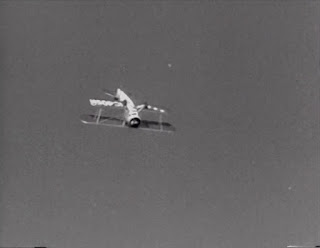 There’s lots of great footage of vintage aircraft including Ford Tri-Motors, an eleven-passenger aircraft which was a mainstay of American civil aviation in the late ’20s and the ’30s. There’s some quite exceptional aerial photography. There are even dogfights! Very well staged dogfights. And Ann Dvorak looks pretty fetching in her rather sexy 1934-era stewardess uniform.

OK, the plot is at best workmanlike and there isn’t much of a mystery but the characters are engaging. We want things to work out between Three Star and Judy because they’re likeable and we believe in them. There’s a spy thriller element but the canister of explosive is really just a McGuffin. What matters is that there’s something that the bad guys are prepared to kill for. 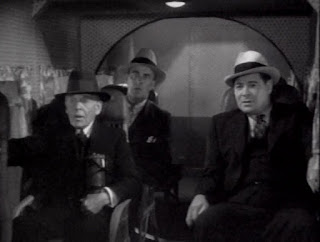 There’s action in the skies and on the ground, there’s some suspense and there’s romance. In other words, there’s everything you need to make a thoroughly enjoyable B-picture. The two leads are excellent and the supporting cast is good, especially George Cooper providing some low-key comic relief as the world’s most hopeless pilot.

Murder in the Clouds is just plenty of good clean fun. Highly recommended.
Posted by dfordoom at 9:57 PM