Night of Evil is an American low-budget film that is part exploitation movie and part moral scare melodrama with a bit of film noir thrown in as well.

Dixie Ann Dikes (Lisa Gaye) is a sixteen-year-old girl living with foster parents in a small town. She is raped by a couple of local boys. Her foster parents blame her and she is dumped in the Holland Home for Girls. Which isn’t too bad. When she’s eighteen and leaves the home she moves in with Linda Dietrich (Lynette Bernay) who was brought up in the Holland Home as well and likes to help the girls when they have to make their way into the world. He tries to offer Dixie Ann motherly advice, which Dixie Ann sometimes listens to.

Everything goes great for Dixie Ann. Linda’s boss, an advertising exec, suggests that Dixie Ann should enter a beauty pageant. She might even become Miss America but at the very least it could be the start of a modelling career.

Dixie Ann has a boyfriend, Kent, a really nice boy who stood by her when she was raped. But when he discovers she’s entered a beauty contest he decides the townspeople must have been right about her after all. Any girl who would enter a beauty contest must be no better than a whore.

Then Dixie Ann meets charming lounge lizard Chuck Logan (William Campbell) and he sweeps her off her feet. 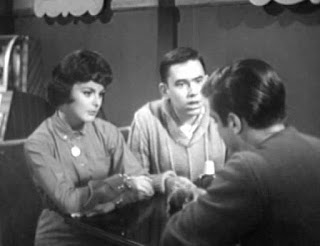 After a couple of dates he suggests they should get married straight away and she agrees, even though this means that technically she can’t enter any more beauty pageants (they’re only for single girls). But Chuck is so charming and handsome. How is an innocent girl like Dixie Ann supposed to know that he’s a gangster? And not just a gangster but a psycho.

Chuck gets himself involved in a kidnapping case. Kidnapping a cop is really dumb even if the cop does have a rich wife who might pay a big ransom. It’s a bad idea and with Chuck’s psychotic tendencies coming to the fore it could turn out to be a spectacularly bad idea. And it’s not just that Chuck is a hoodlum and a psycho. He’s as dumb as a rock as well. 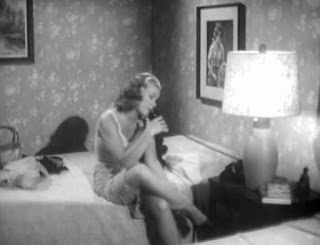 Dixie Ann feels that her life is over. It’s not just that she’s no longer eligible for beauty contests. She how finds she’s married a hoodlum. She’s taken the first steps on the road to ruin. She might as well take the next step so she becomes a stripper. The next step after that is prostitution. She’s not prepared to do that so she looks for an alternative and she finds one that is even more disastrous.

It looks like Dixie Ann’s life is going to end in squalor and degradation but then comes the ending. Which presented writer Louis Perino with a challenge. This was 1962. Bad girls had to be seen to be punished. Usually in a movie like this the punishment was likely to be pretty drastic. But is Dixie Ann a bad girl or a victim? Is there a viable way in which justice can be done while saving her at the same time? You’ll have to watch the movie to find out if he came up with a solution or not. 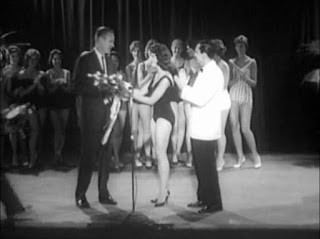 On the surface this is just another good girl gone wrong movie but you have to remember that she was raped and then after that she was taken advantage of by Chuck. Any audience is going to regard her as a sympathetic character and the movie’s sympathies are with her as well. She’s been dealt a series of bad hands by fate. She hasn’t played them very well but would any eighteen-year-old small town girl have done any better? Would any of us? So it’s a movie with at least some serious intentions, suggesting that social problems can be complicated and guilt can be difficult to assign.

There’s a definite film noir element, with Dixie Ann as the noir protagonist brought to degradation partly by bad luck and partly by understandable errors of judgment due to youth and naïvete. Chuck Logan is the femme fatale equivalent, the good-looking charmer who leads her on to disaster.

Of course it’s an exploitation movie as well, which makes for an interesting combination of sensationalism and sensitivity. 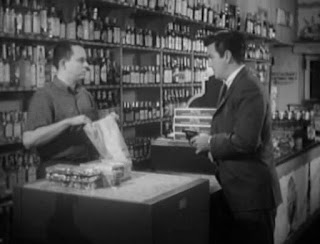 Much depends on Lisa Gaye’s performance which is pretty good. She plays Dixie Ann as a confused character for whom life is just much too complicated and that’s the right way to play it. She’s also attractive enough to be a convincing beauty queen. The other performances are also better than you expect in a Z-grade cheapie.

I don’t want to sell this movie too highly. It’s a low-budget flick and it’s melodramatic and contrived at times. It is however a much better movie than it has any right to be.

Night of Evil is no masterpiece but it combines noir and exploitation extremely well and it works surprisingly well. Recommended.
Posted by dfordoom at 12:19 AM