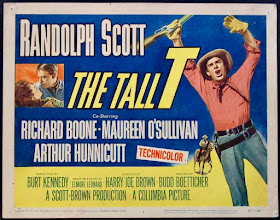 The Tall T is an early entry in Budd Boetticher’s Ranown cycle, a series of seven westerns all starring Randolph Scott. These are Boetticher’s most admired movies, and with good reason. The Tall T was based on an Elmore Leonard story and the screenplay was written by Burt Kennedy (who wrote most of the films in the Ranown cycle).

The early part of The Tall T establishes an almost idyllic mood. Pat Brennan (Randolph Scott) is a former ranch foreman who now has a spread of his own. It’s not much of a spread, he can’t even afford to hire a single ranch hand, but it’s his own place and he’s happy. He’s confident that he can make a go of it. Brennan is a quiet sort of guy but he’s not by any means a bitter loser or a misanthrope and he’s entirely devoid of self-pity. He’s pretty easy-going and mostly he gets along with people just fine.

Even when he loses his horse and has to walk the fifteen miles to get back home he remains cheerful. It turns out he won’t have to walk. His friend Rintoon gives him a lift. Rintoon drives the stage coach that serves this part of the territory. It’s not a scheduled stage run. A smarmy bookkeeper named Willard Mimms has hired the stage to take himself and his new bride Doretta to a neighbouring town for their honeymoon. 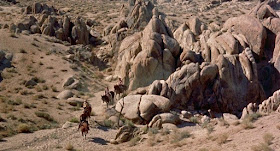 And then the movie switches gears very dramatically indeed, and the idyllic mood gives way to terror and brutality. Outlaw Frank Usher (Richard Boone) and his two goons had been intending to rob the stage coach but when they discover that Doretta Mimms is the daughter of the richest man in the territory a better idea presents itself. They will hold Doretta for ransom. They decide to hold Pat Brennan as a hostage as well.

Brennan has no illusions about his prospects. Usher and his trigger-happy sidekicks Billy Jack (Skip Homeier) and Chink (Henry Silva) have killed four people within the space of 24 hours. Whether that ransom is paid or not it’s a certainty that the gang will kill Brennan and Doretta Mimms. Frank Usher doesn’t believe in leaving any witnesses alive. Usher rides off to collect the ransom money, leaving Chink and Billy Jack to guard the hostages. Brennan figures that he is simply going to have to come up with a way out of this before Usher gets back. 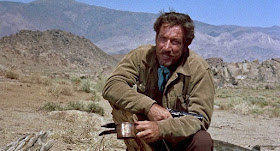 Randolph Scott is excellent as usual. Here he’s playing a nice guy who has to become a reluctant hero and he’s going to need to play it smart and cool and luckily he’s the kind of guy who can do that.

Richard Boone as Frank Usher is perhaps even more interesting as a character. Usher is a bad man but he wasn’t always a bad man and maybe he’s not totally comfortable being a ruthless outlaw. An intriguing relationship develops between Brennan and Usher. At times they almost like one another.

The Brennan-Usher relationship is the core of the movie. There are of course huge differences between the two men but perhaps some similarities. They’re both to some extent loners and outsiders. Maybe Brennan is the man Usher could have been if only he’d had a few breaks. And maybe Brennan is the man Usher would like to be. And Brennan sees Usher as a man who didn’t need to go bad. 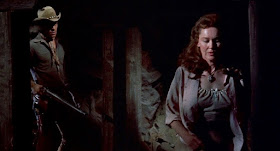 Maureen O’Sullivan makes Doretta Mimms an interesting character as well. Doretta is supposed to be dowdy and unattractive, the sort of woman who would be sufficiently lonely and desperate to marry a man she despised. Maureen O’Sullivan had of course been a major glamour babe in the 30s, especially playing Jane in half a dozen Tarzan movies.

The plots of Boetticher’s westerns are not overly complicated. A good story doesn’t need to be complicated. What matters is that Burt Kennedy’s script is tightly constructed and it provides the necessary emotional punches.

Boetticher’s visual style is also never unnecessarily complicated. His compositions are always superb but his visuals are never fussy or gimmicky. Both the script and the visuals are simple and austere and very very effective. 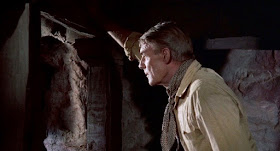 The Powerhouse Indicator Blu-Ray (which I believe is region-free) provides a pretty decent transfer. The extras include an audio commentary by Jeanie Basinger and a brief but excellent introduction by Martin Scorcese. Scorcese makes the point that Budd Boetticher was an obsessive bullfight fan and that his westerns were like bullfights - ritualised formalised combats conducted according to rules and a code of honour. I suspect that Scorcese is correct in seeing this as the key to understanding Boetticher’s westerns. There’s also a radio interview with Elmore Leonard (who liked the movie quite a bit).

The Tall T is quite simply a great western. Highly recommended.