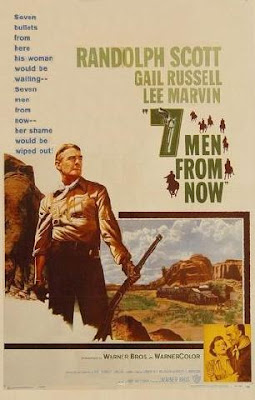 7 Men From Now was the first of a series of westerns starring Randolph Scott and directed by Budd Boetticher. These westerns are the movies on which the director’s considerable cult reputation rests.

The movie was made in 1956 by John Wayne’s production company, Batjac. A few years earlier Wayne had produced Bullfighter and the Lady which gave Boetticher his major break as a director. Wayne was unavailable to play the lead in 7 Men From Now (he was doing The Searchers for John Ford at the time) but suggested Randolph Scott. It was a momentous suggestion for the careers of both Boetticher and Scott.

Boetticher was not a man who could have worked easily within the strict confines of the studio system but making a modestly budgeted production for Batjac gave him the artistic freedom he craved.

Boetticher’s approach to the western genre was simple and rather austere. He was uninterested in big stories and he was equally uninterested in taking a flashy approach to the job. With a story (by Burt Kennedy) that appealed to him, with a handful of strong characters and a very fine cast, he crafted a deceptively straightforward but immensely powerful film.

We are plunged straight into the action. The backstory will be sketched in later with remarkable economy. A man (we will later learn he is Ben Stride, played by Randolph Scott ) takes shelter from the elements in a cave, with two men. He mentions he’s from Silver Springs, one of the two men remarks that there was a killing there, and the two men are shot.

As we will soon discover, the two men were among seven men who held up the Wells Fargo office in Silver Springs. A woman was shot and killed. She was Ben Stride’s wife. He had been the sheriff but had recently been deposed, not being the sort of man who was good at winning elections. Stride then encounters a young couple, John and Annie Greer, in a wagon heading for California. He travels with them, their journey taking them through country occupied by hostile Indians.

On the journey they encounter Masters (Lee Marvin). While Stride wants to find the robbers for motives of revenge Masters wants to find them to get the $20,000 they stole. They become temporary allies but it’s an uneasy and unstable alliance. Sooner or later they will face a showdown. Further complications arise over Annie Greer. Both Stride and Masters are interested in her while she’s obviously interested in Ben Stride.

It’s a classic western tale cut down to basics but the starkness of the plot gives it a gravity that makes it almost elemental. The subtle characterisations and the quality of the acting make it especially powerful.

Randolph Scott is perfect. Ben Stride is a bleak kind of hero, but not totally unsympathetic. His strengths are qualities that are unfashionable today - a driving sense of duty and a severe view of justice. Scott’s performance is reserved but extremely effective and contrasts nicely with Lee Marvin’s bravura performance. Masters is a complex villain, with a quirky sense of honour combined with opportunism and ruthlessness. Masters and Stride do not hate each other and they even have a sneaking regard for one another. They know that eventually one of them will have to kill the other but this is something that Ben Stride genuinely regrets. Masters was not involved in the robbery which led to Stride’s wife’s death so there’s no personal animosity.

The actual killers are more straightforward villains but they’re not the real focus of the film. In fact they could almost be seen as a McGuffin - their actions drive the actions of both Stride and Masters but they are unimportant in themselves. John and Annie Greer are more important and Walter Reed and Gail Russell give fine performances.

Boetticher’s westerns had an immense influence. When Sergio Leone met Boetticher he assured him that he had stolen all his ideas from the American director! 7 Men From Now has been described as an existential western but while there’s some truth to that it’s wise not to push the point too far. Despite its complex hero and equally complex villain there is a moral centre to the movie that is at odds with the fashionable existentialism of intellectuals of the 50s.

The DVD comes with a host of extras including a quite lengthy documentary. The movie is beautifully restored. John Wayne’s son Michael who has overseen the release of the Batjac movies on DVD insisted that if the movie was going to be released the restoration had to be done properly. The result is a fitting tribute not only to Budd Boetticher but also to the underrated achievements of John Wayne as a producer.

A great western and essential viewing.
Posted by dfordoom at 12:35 AM