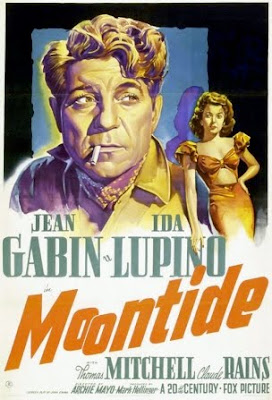 Moontide was the picture that was supposed to launch Jean Gabin as a Hollywood star. Like almost everything else connected with this movie it didn’t work out as intended, but it’s still a fascinating movie.

Filming started on this 20th Century Fox production in November 1941 but it had already encountered numerous obstacles and its troubles were only just beginning. The Production Code Authority had absolutely vetoed the original screenplay. The original writer, Nunnally Johnson, was replaced by John O’Hara. Jean Gabin insisted on major changes to the script. Studio chief Darryl F. Zanuck insisted on further major changes. Soon after shooting began director Fritz Lang walked off the picture. Plans to film on location had to be scrapped. As a result it’s a bit of a mess in some ways but paradoxically many of these problems ended up working in the movie’s favour. It’s a kind of film noir fairy tale love story. French dock worker Bobo (Gabin) arrives in San Pedro, California. He meets up with his old buddy, Tiny (Thomas Mitchell), who has a job lined up for him. Bobo celebrates his arrival by getting so drunk that when he wakes up next morning he has no memory of the night before. Nor does he have any idea how he ended up on a bait barge in the harbour. The arrival of the Chinese owner of the barge, Henry, clarifies things slightly. Bobo and Henry had ended up drinking together and Henry had offered him a job, selling bait.

Bobo’s initial reaction after this is to move on as quickly as possible, but then fate steps in. A young woman tries to drown herself and he saves her. The woman is Anna (Ida Lupino). Like Bobo she’s an outsider and she has a past although we never actually find out any details of either her past or Bobo’s for that matter. That’s mainly due to problems with Production Code Authority. In the original novel and in the early version of the screenplay Anna is a prostitute and Bobo is a man who has had many lady friends, quite a few of whom had followed Anna’s profession. 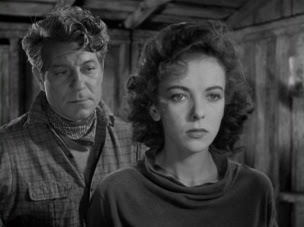 All this had to be cut but in some ways that strengthens the film. Enough is left to suggest that both have seen quite a bit of life, and to lead us to suspect that both have had colourful pasts, but the fact that we don’t know the details gives them both an odd kind of innocence. All we really need to know is that both of them are outsiders, homeless strays.

Bobo takes Anna back to the barge to recuperate. He’s a tough guy with a fiery temper but he’s the sort of tough guy who would take in a bird with a broken wing. Like Anna. He has a gentle side to his character and it responds to her immediately. She obviously not used to men showing this type of tenderness, and it doesn’t take her too long to realise that she likes it. 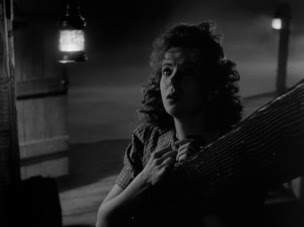 Their blossoming love soon faces some obstacles. Tiny has a weird kind of hold on Bobo and Tiny dislikes Anna. He apparently dislikes any woman that Bobo likes. Tiny more or less lives off Bobo - he arranges jobs for Bobo and then pockets half the paycheques. There has also been a murder - an old and rather unfriendly character named Pop Kelly who happens to have been drinking at the same bar as Bobo on the day Bobo arrived in town. Since Bobo remembers nothing of this night, and since Bobo’s friend Nutsy (Claude Rains) finds Pop Kelly’s cap in the barge, we suspect that either Bobo was involved or someone was trying to frame him. It’s not long before Tiny puts this idea into Anna’s head.

The odds seem stacked against the two ill-starred lovers. They set up housekeeping on the barge and they are soon talking of marriage but Tiny is determined to thwart their plans.

The film’s reticence about the characters’ pasts and the downplaying of Bobo’s violence were the results of demands made by both the Production Code and Darryl F. Zanuck. The influence of the Code on Hollywood films in the 30s and 40s is today almost universally viewed as being pernicious and disastrous, as is the kind of studio interference that Zanuck indulged in. In practice however the results were not always entirely destructive and in this case Zanuck’s instincts were undoubtedly correct. The changes forced on the writers have the effect of making both Bobo and Anna much more sympathetic and also much more vulnerable. They give the two central characters a kind of innocence that makes their outsider status much more poignant. We desperately want them to make it and that gives the movie a much greater emotional impact. We feel that they are ill-equipped to deal with a hostile world. 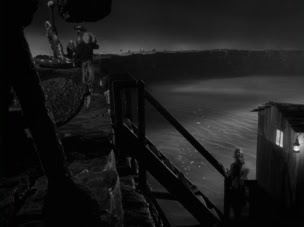 Jean Gabin did not find favour with American audiences at the time and he made only one more film in Hollywood before returning permanently to France. Gabin could not adapt to the Hollywood system of movie-making. That’s perhaps a pity since his performance is extremely good.

Ida Lupino is even better. This is a more vulnerable Lupino than usual and she gives a marvellously subtle performance. Claude Rains was cast against type as the scruffy but wise Nutsy and his performance is very unselfish - Rains could chew scenery with the best of them but he backs off in this picture allowing Gabin and Lupino to maintain centre stage. The big surprise is Thomas Mitchell as Tiny. Mitchell usually played loveable types but Zanuck insisted he’d be wonderful as the sinister Tiny, and Zanuck was right. 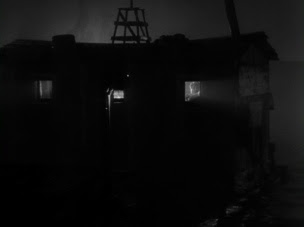 Visually the movie is extraordinary. Charles G. Clarke was nominated for an Oscar for his cinematography and deservedly so. It’s a mix of visual styles - there’s a lot of film noir and quite a bit of German Expressionism but it owes its biggest debt to the French poetic realist films of the 30s. This may have been indirectly due to Jean Gabin. The visual approach is strikingly reminiscent of Marcel Carné’s 1938 French hit Port of Shadows which starred Gabin. It’s impossible to believe that Moontide wasn’t influence by that film. One suspects that with Gabin as the star someone at 20th Century-Fox must have watched Carné’s film and decided that the look of that film would be perfect for this one. There’s also a debt to Salvador Dali, who did the original drawings for Moontide’ s celebrated drunken dream sequence. Zanuck also had a major input and at least one important (and very effective) scene was entirely Zanuck’s idea.

Part of the look of the movie was entirely fortuitous. The outbreak of war on December 7 1941 meant that plans to film on location at San Pedro had to abandoned so the studio recreated the harbour setting on a sound stage. This magnificent set, combined with the fog-shrouded cinematography, gives the movie an incredibly artificial look. It’s as if the four main characters are trapped in a strange fairy tale word of their own, with Bobo as the hero, Anna as a kind of princess of the slums, Tiny as the wicked witch and Nutsy as the fairy godmother. This fairy tale ambience suits the material perfectly and proves to be the best thing about the film. Fritz Lang was director for the first two-and-a-half weeks of filming (before Archie Mayo took over) and many of the scenes he shot remain in the film, although apparently no-one is now sure which scenes they are. Lang and Gabin clashed repeatedly on set but both wanted the movie to be more doom-laden and pessimistic and disagreed vehemently with Zanuck on the general direction the film should take. Much as I revere Lang and Gabin I think Zanuck understood the material better than they did.

Moontide was not a commercial success, probably because it’s so uncompromisingly non-realistic and really seems like a strange hybrid. It’s a combination of European and American sensibilities, of film noir and romance, of crime movie and fairy tale. Like Charles Laughton’s 1956 masterpiece Night of the Hunter (which resembles Moontide in many ways) it was a movie that contemporary audiences were not prepared for. Although by no means a perfect film it’s a strange and rather wonderful experience which I recommend very highly.

The DVD in the Fox Film Noir series looks sensational and includes some terrific extras.
Posted by dfordoom at 7:28 PM