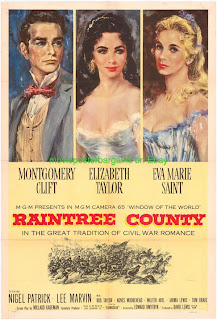 Raintree County is a movie that very few people have a good word for. For many it represents everything that was wrong with Hollywood in the 50s, being overlong, overblown, over-produced and and overloaded with stars. Personally I think it’s a surprisingly interesting film.

Its main claim to fame (or infamy) is of course the fact that Montgomery Clift had his near-fatal car accident during the filming.

It is 1859 and a group of young people are celebrating their graduation from the local academy in a small town in Indiana. Raintree County takes its name from a local legend about a mysterious raintree. Many have searched for the raintree but none have found it. But then it’s one of those things you’re not supposed to find; the search is what matters.

John Shawnessy (Montgomery Clift) and Nell Gaither (Eva Marie Saint) are close friends and there seem to be an unspoken assumption that in the fullness of time they will marry. John does have a rival for her affections, in the form of the cynical Garwood Jones (Rod Taylor), but Nell is hopelessly in love with him and there is no doubting which of her suitors she will choose. Unfortunately for Nell trouble is about to arrive in the form of Susanna Drake (Elizabeth Taylor). 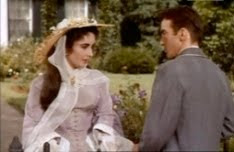 Susanna is a southern belle and it’s never quite clear what she is doing in a hick town in the backwoods of Indiana. What matters is that for John and Susanna it is love at first sight. John is swept off his feet. John and Susanna get to know one another quite well during a 4th of July celebratory picnic, so well in fact that not long afterwards Susanna informs him that they are expecting a Happy Event. John is the kind of guy who will always do the right thing so there is never any doubt that he will marry her. He’s crazy about her anyway, so it’s not exactly a great sacrifice on his part.

Susanna is crazy about him as well, but unfortunately she’s also just plain crazy. She has never recovered from the psychological effects of a disastrous that destroyed the family mansion and killed her parents as well as her much-loved nanny Henrietta. There was a major scandal surrounding this fire, with rumours that her father had been having an affair with Henrietta. This being the South, Henrietta was both black and a slave. Susanna is haunted by memories of the fire, and also by a strange dread that she herself might be not entirely white. 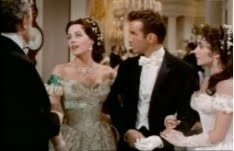 As the Civil War rages Susanna becomes progressively more unstable until finally she disappears, taking their son with her. John is determined, despite the war, to find her.

There’s a lovely and amusing performance by Nigel Patrick as the professor at the local academy, an individual who combines cynicism, scepticism and idealism in a way that both disturbs and inspires his students. Lee Marvin is fun as the boozy but good-natured Flash Perkins.

The problem is John Shawnessy. And the problems with John Shawnessy stem from a lifeless performance by Montgomery Clift and the fact that he’s a character who is essentially an observer of life. There’s the danger that this type of character can end up coming across as bland and uninteresting and that’s what happens here. Clift was having problems with pills and booze even before the accident but the script is as much to blame as his acting.
There is one thing that makes this film worth watching, and that’s Susanna. She’s by far the most complex character in the movie and Elizabeth Taylor’s performance is by fa 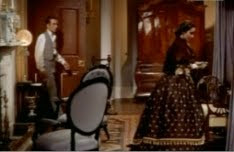 r the best in the movie as well. And this is where the movie gets interesting since it raises the always intriguing (to me at any rate) question of the differing ways that audiences in the 50s and audiences today would respond to such a character.

In some ways an audience today would be more sympathetic towards Susanna, seeing her more as a victim (of childhood trauma and/or mental illness) and less in moral terms. On the other hand her beliefs and many of her actions would have been much less shocking to audiences in 1957.

It’s clear though that Susanna was always intended to be an ambiguous character. Although she’s superficially set up as the Bad Girl to Eva Marie Saint’s Good Girl, it’s significant that Susanna doesn’t actually commit any of the sins that would have damned her in the eyes of an audience in 1957. She’s a faithful wife, she tries to be a good mother, and she’s willing to sacrifice herself for her husband. It’s true that she traps John into marriage (she wasn’t really pregnant) 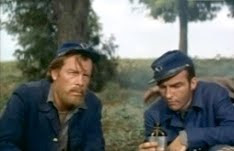 but he’d already fallen for her anyway. And we’re not told what exactly happened at that memorable 4th of July picnic - was it a deliberate act of seduction on Susanna’s part or simply two young people celebrating their nation’s birthday a little too enthusiastically? Nell makes a remark at one point suggesting that it was extremely common for such celebrations to end in such a manner.

The movie did Elizabeth Taylor no harm. I gained her an Oscar nomination, and as she later remarked, it taught her to “climb walls and chew scenery” - skills she was to put to good use in the coming years. Even though it is a little over-the-top she is careful not to portray Susanna as a stereotypical Wicked Woman, and she remains a sympathetic character.

It’s certainly a flawed movie, and desperately needed tightening up. Clift’s performance is a major deficit, especially since one of the key questions driving the plot is whether his devotion to his wife is motivated by pity or by love. Clift is so vague that we end up not having the slightest idea as to the answer. Worth watching though for the very complex and ambiguous female lead character and for Elizabeth Taylor’s performance.
Posted by dfordoom at 4:02 PM