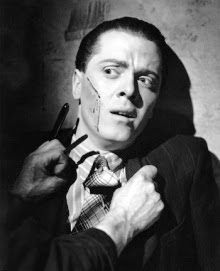 Brighton Rock is beautifully photographed – Brighton looks delightfully seedy and vulgar. There are some wonderful close-ups of Ida, where she becomes almost overwhelming. There is a film that has been superbly put together – fine acting (including the first Doctor Who, William Hartnell, as one of Pinkie’s gang), great photography, great editing. There isn’t a wasted shot in the movie. There is only one tiny blemish, a tacked-on epilogue that weakens the book’s cynical and ironic ending. Overall this is a brilliant example of movie-making at its best.
Posted by dfordoom at 6:04 AM No comments: 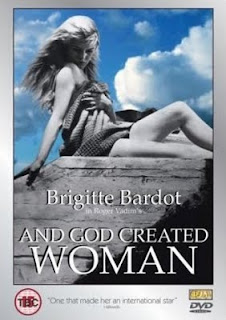 And God Created Woman (Et Dieu... créa la femme) wasn’t Brigitte Bardot’s first movie, but it was the movie that made her an overnight sensation. Released in the US in 1956 without a Production Code seal, it was a major art-house hit, due mostly to a very brief nude scene that as considered amazingly hot stuff back then. It was the nude scene that generated controversy at the time, but in fact it’s quite a nasty little film, although for reasons that have nothing to do with the nudity.

In St Tropez rich businessman Eric Carradine (played by the wonderful Curd Jürgens) plans to open a casino. To do so he needs to gain possession of a run-down boatyard owned by the three Tardieu brothers. They won’t sell, and it later transpires that they refuse to sell because as long as they own a business, even a failing business, they can convince themselves they’re middle-class rather than the poor white trash they really are. The situation is complicated by the presence of Juliette (Bardot). Both Carradine and the eldest of the Tardieu brothers are desperately anxious to get Juliette into bed.

Juliette has other problems. The family she has been living with don’t approve of her, and are threatening to send her back to the orphanage she came from (a prospect she regards as being slightly worse than being sent to prison). She wears tight sweaters, flirts with men and listens to music on the juke box, which of course is enough to convince the respectable townspeope that she’s a whore. In a particularly creepy scene she’s told that she can avoid being sent back to the orphanage if she can get a certificate from a doctor proving that she’s still a virgin. She quite reasonably tells the woman from the Welfare Board what she can do with that suggestion.

Antoine Tardieu is a dumb, violent, misogynistic creep who treats Juliette like a whore, so naturally she fall falls in love with him. It’s that sort of movie. To avoid the orphanage she needs to get married, but Antoine considers that women of Juliette’s sort are not the sort of woman one marries. His brother Michel though is willing to marry her. Michel is nerdy, sensitive and kind, so naturally she despises him. It’s that sort of movie. They are married, but Antoine seduces Juliette. Which of course is Juliette’s fault, and proves she really is a whore. There’s no hint of disapproval of Antoine’s behaviour, in fact his mother seems to think he’s done Michel a favour by showing him that his wife is a tramp. Michel finally wins Juliette’s love by slapping her around a bit thus proving that he’s a real man.

Director Roger Vadim’s sexual politics seem, more than anything else, muddled. At one point we are told that girls like Juliette were made to destroy men, and it seems that Vadim can’t quite decide if that’s Juliette’s fault or not. She’s presented as a reasonably sympathetic character, but this was 1956, and female sexuality as a destructive force was still a view that found favour with audiences. And when at one point Juliette is informed that what she needs is for her husband to give her a good spanking the complete lack of irony with which this message is delivered is rather depressing.

I’ve actually liked some of Vadim’s later films, so I’m reluctant to write him off as a mere sexist creep. The movie does have some compensations. Curd Jürgens is very good, as always. And there’s a very good scene with Bardot in a nightclub, dancing to crazy jazz rhythms. If you want to know why was was one of cinema’s iconic sex goddesses this scene tells you everything you need to know. Bardot is actually quite good. Within the limitations of the script she does her best to portray Juliette as a free spirit rather than a manipulative monster. And the movie does offer an intriguing, if rather disheartening, look at 1950s sexual mores.

Posted by dfordoom at 6:01 AM No comments: 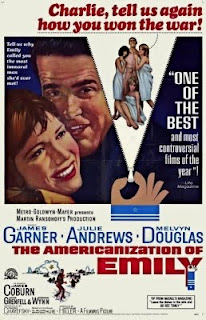 Posted by dfordoom at 5:26 AM No comments: 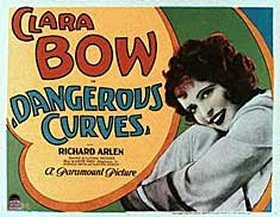 Let’s face it, if you’ve seen one circus movie, you’ve pretty much seen ‘em all, and Dangerous Curves is your basic stock-standard circus movie. It does have one big thing going for it, though, and that’s Clara Bow. And that’s enough. She’s Pat Delaney, daughter of a famous high-wire performer, and in love with the circus’s headliner, Larry Lee, also a high-wire artist. Trouble is, Larry’s in love with his current partner, Zara, and he doesn’t even notice poor Pat. And Zara is a no-good dame who’s two-timing him, and she’s bringing him to the brink of ruin. Will he realise in time that Pat is really the girl for him?

This 1929 comedy/romance (one of Bow’s first talkies) is about as corny as a movie can get, but it’s very corniness somehow pulls it through. If it had been a bit less corny, it wouldn’t have worked. And Clara Bow is sensational, as always. It’s a pity Paramount couldn’t have found her slightly better material, bit if you’re a fan this one is still worth seeing.

Posted by dfordoom at 5:23 AM No comments: