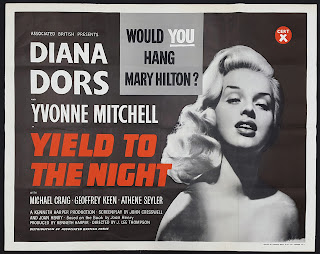 The 1956 British production Yield to the Night was the most highly regarded of the movies of Diana Dors and is usually considered to be the movie on which her reputation as a serious actress rests. Personally I don’t entirely agree. I have a very high opinion of Diana Dors as an actress but I think she did better movies and gave better performances (such as her performance in Unholy Wife).

It’s not that she isn’t superb in Yield to the Night (and actresses have won Oscars for performances much inferior to this one) but I think she’s done more subtle and more original work than this. 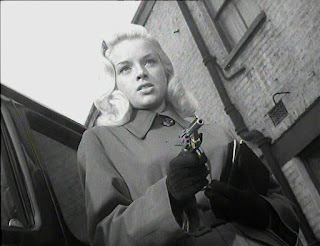 As for the movie itself, your feelings about it will depend almost entirely on your response to the movie’s politics. For this is a very very political movie. Mary Hilton (Diana Dors) is a married woman, but not exactly what you’d call a happily married woman. When she meets good-looking piano player Jim Lancaster (Michael Craig) she needs no persuasion at all to drift into an affair.

The problem is that for Jim this is just a distraction, some recreational sex to keep his mind off his other problems. And he has lots of problems. His biggest problem is Lucy Carpenter. He’s crazy about her but she’s really out of his league. His other problems are a major propensity towards self-pity and self-dramatisation. Unfortunately Mary is hopelessly in love with him. And she can’t quite accept the evidence that he’s not that interested in her for anything other than casual sex. 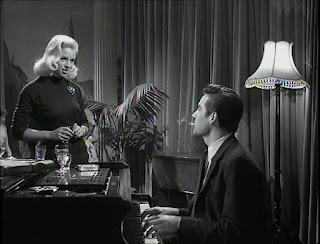 Mary is not exactly stupid, but she’s a hopeless romantic and she’s convinced herself that Jim is the one man for her. Of course this situation is bound to end badly, and it does. It ends very badly indeed. And rather than just get upset in the short term, Mary broods. She starts thinking about revenge. And she starts thinking about Jim’s gun, the one she took away from him when he was going through one of his major self-pity stages. Mary starts to think that Lucy shouldn’t be allowed to get away with doing what she did. Mary starts to think that Lucy deserves to die. And she has Jim’s gun. And pretty soon Mary finds herself a murderess.

Most of the movie concentrates on her experiences in prison, on the British equivalent of Death Row. The most interesting thing about the movie is the focus on her relationship with the various female prison warders, and in particular with MacFarlane (Yvonne Mitchell). Despite her tendency to shoot people Mary is a likeable rather vulnerable young woman and the warders grow quite fond of her. They get to know her very well, and they like her. Diana Dors wisely doesn’t resort to scenery-chewing. She downplays her performance, and that makes it all the more affecting. 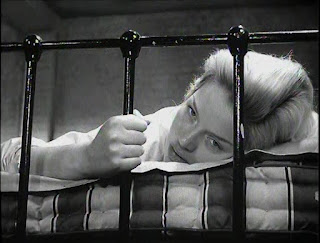 The support cast is very strong, with Geoffrey Keen as the chaplain contributing a sensitive performance. And as mentioned earlier Yvonne Mitchell is extremely good.

The problem with this movie is the problem with all social problem movies. It’s essentially propaganda. Like all such movies it’s deliberately and shamelessly manipulative, willing to go to any lengths to advance its political agenda. And in this case it does so in a breath-takingly dishonest manner. The actual murder victim is dehumanised, depersonalised and marginalised to the point where she scarcely even exists, except in so far as she’s demonised to make us see her as the real villain. 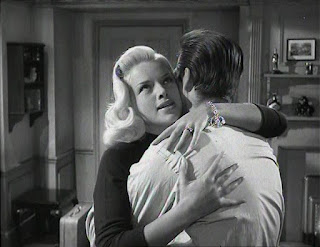 To accept this movie you have to accept wholeheartedly a particular political view of crime, that the so-called victims of crime (such as the wicked Lucy) are the real villains while the criminals (like poor sweet Mary) are the victims and the ones deserving of our sympathy. Not only is Mary much nicer than Lucy, she’s also younger and prettier. And she’s a real person, a person we get to know very well, while Lucy is just a faceless evil woman. I can’t recall ever seeing a movie that uses such techniques quite so blatantly.

None of which detracts from the skill of director J. Lee Thompson or the magnificent performance of Diana Dors, but I couldn’t help feeling a bit of a nasty taste in my mouth after seeing this movie. An extremely well-made and very emotionally powerful movie, but if you don’t buy its political agenda you may well feel uncomfortably that you’ve been used.
Posted by dfordoom at 10:03 PM