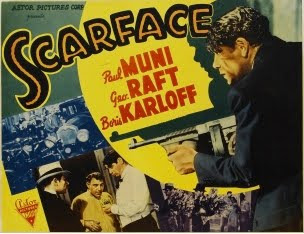 Gangster movies were major money-spinners during Hollywood’s pre-code era, benefiting from lax enforcement of the Production Code. These early 30s gangster movies were breathtakingly violent and supremely stylish exercises in mayhem. Three of these movies stand out above all the others and remain the most iconic of all movies in this genre - Public Enemy (directed by Wiliam Wellman), Little Caesar (directed by Mervyn LeRoy) and Scarface (directed by Howard Hawks).

With a strong script by Ben Hecht and with Hawks as director Scarface had the potential to be the greatest of them all. In fact it was the least influential of the three. This was to a large extent because it ran into serious censorship problems. The Production Code was not yet being enforced strictly but there was still the problem of the state censorship boards which seemed likely to prevent the release of the movie in those states afflicted with such bodies. And the level of violence in Scarface was so extreme that even the relatively easy-going pre-1934 Production Code Authority baulked at allowing its release.

The title character, Tony “Scarface” Camonte, bears more than a passing resemblance to the most notorious gangster of them all, Al Capone. At the start of the movie Camonte is the bodyguard of racketeer Louis Costillo. Chicago crime is well-organised but still fairly civilised. Mobsters like Costillo are happy to make good money but they don’t want to make waves. This is about to change as a new breed of more violent, more vicious, more ambitious gangster emerges. Camonte is at the forefront of this new wave. He gets rid of Costillo and puts Johnny Lovo in his place, but Camonte is now the real organiser of the south side liquor rackets. Camonte regards Lovo as weak and it will only be a matter of time before Camonte emerges into the open as the real leader and makes a play to control crime in the whole city, not just the south side.

A gang war erupts, and this is a real war with mobsters armed with submachine guns gunning each other down on the streets. Nothing can stop Tony Camonte’s rise, but while he has the ruthlessness to get to the top he has his weaknesses as well. Tony Camonte’s big weakness is women. He understands nothing about them but he wants them with the same moronic enthusiasm that he wants money, power and guns. His desire to take Johnny Lovo’s girl Poppy (Karen Morley) away from him will make him a deadly enemy but it’s his relationship with his sister Cesca (Ann Dvorak) that will get him into real trouble. Oddly enough while the censors objected to so much in this movie they apparently failed to notice the strongly incestuous nature of this relationship.

Tony is insanely possessive where his sister is concerned. The idea that she might want to meet other men drives him into a jealous rage. Cesca is the only person Tony cares about apart from himself, and there is nothing remotely healthy or natural about his feelings for his sister. When she falls in love with his most trusted henchman, Guino Rinaldo (George Raft) you know there’s going to be trouble.

This is almost the ultimate gangster movie, but for me it has one major failing - Paul Muni in the title role. Edward G. Robinson and Jimmy Cagney both went somewhat over the top in their own iconic gangster performances but there’s still a kind of truthfulness there that makes the characters seem alive. Muni by comparison is simply a ham. It’s difficult to understand why he was at one stage so highly though of as an actor. His portrayal is occasionally amusing but is much too close to caricature.

George Raft on the other hand underacts, and does so very effectively. Karen Morley is reasonably good as Poppy. Ann Dvorak always had a tendency to inject a note of hysteria into her performances but in many cases it worked quite well, as it does in this film.

The Region 1 DVD includes the alternative ending shot to placate the censors, and it demonstrates just how much better the original ending is.

A good movie on the whole, stylish and fast-paced, but with a better actor in the lead role it could have been a great one.
Posted by dfordoom at 7:34 AM