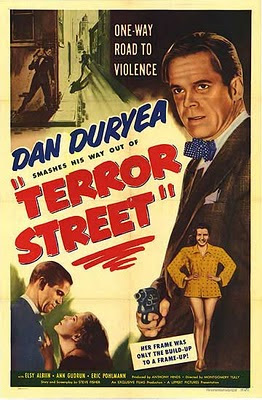 Terror Street (released in the UK as 36 Hours) was one of the many co-productions between the American Lippert Films and British studio Hammer Films. In the early 50s American distributor Robert L. Lippert and Hammer Films made a deal to co-produce cheap crime B-movies. They would take advantage of a British government scheme to prop up the British film industry. This scheme required productions to be predominantly British but with some foreign content, which meant that as long as the rest of the cast and crew were British they could import an American star to play the lead.

The imported American stars were usually either a little past their prime or they were stars of the second rank, but in most cases they were actually pretty decent actors and they gave more than satisfactory performances. In this case the US import is film noir icon Dan Duryea.

Duryea is a US pilot, Major Bill Rogers, who had married a Norwegian girl named Katie in London during the war. It had been a happy marriage until Rogers was posted back to the US for a training course. Katie’s letters had stopped coming and since they had parted on bad terms Rogers figures she may have found someone else. So he gets a 36 hour leave and gets a buddy to smuggle him back into England so he can find out if he still has a marriage.

All this is revealed in a flashback. Major Rogers is now in London, and discovers that their flat is deserted and Katie is gone. He tracks her down, in a suspiciously expensive West End flat with even more suspiciously expensive furs in the closet. He has a gun with him and he’s more or less convinced himself that Katie has done him wrong. He intends to have it out with her but events take an unexpected turn, he is knocked unconscious by someone who had been hiding in the flat, and when he wakes up his wife is dead of a gunshot wound with his gun lying by the body. He decides that persuading the British police of his innocence is likely to be a futile endeavour so he makes a run for it.

Luckily he encounters Jenny, a kind-hearted young Englishwoman who believes his unlikely tale and agrees to help him out. His advantage is that no-one knows he’s in England, but if he fails to reappear at his air base in the US once his leave is up the game is up, so he has 36 hours to prove he isn’t guilty.

Steve Fisher wrote some great film noir screenplays but this is not one of his best efforts. The story isn’t wildly original and the plot does have some holes in it. Director Montgomery Tully made countless crime films and manages to keep the action moving along quickly enough that you don’t really have time to notice the creakiness of the plot.

More importantly it has Dan Duryea, and he manages to carry the audience along and make them believe in his performance even when the actions of the characters strain credibility rather severely.

Swedish actress Elsie Albiin is adequate enough as Katie, and Gudrun Ure as Jenny is reasonable if a little stilted. John Chandos makes a delightfully creepy villain, his performance being a major highlight.

This is very much a B-movie and has no pretensions to being anything else. Judged as such it’s perfectly acceptable entertainment and it does have Dan Duryea after all.

VCI’s DVD release looks pretty good and includes three short but interesting commentaries by Alan K. Rode on the film, on Dan Duryea and on writer Steve Fisher. Terror Street is paired with Wings of Danger in volume 4 of VCI’s Hammer Film Noir series.
Posted by dfordoom at 10:11 AM