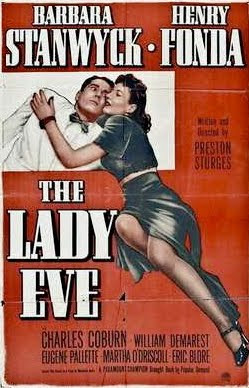 The Lady Eve is a 1941 comedy from writer-director Preston Sturges. I have mixed feelings about his work although I am slowly warming to him. While I don’t think this movie is quite as good as Palm Beach Story it’s still pretty entertaining.

Charles Pike (Henry Fonda) is the heir to a brewing fortune, but his real passion is snakes. He’s just been on an expedition to the Amazon in search of reptilian marvels and now he’s on his way home on an ocean liner. Unfortunately every female on the liner knows he’s fabulously wealthy and unmarried, and they’re all determined to make a play for him. But none of them stand a chance with Jean Harrington (Barbara Stanwyck) on board.

It’s not just that Jean has beauty and style. She also has focus. And what she’s focused on is money. And she knows how to translate her considerable sex appeal into cash.

She’s traveling with her father, the Colonel. Not that he’s a real colonel. In fact the Colonel and his daughter are crooks. If there’s a dishonest way to make a living, they’ve done it. Their specialty is card sharping, but they’re not looking for just one quick swindle. With mark as rich and as innocent as Charles Pike they want to establish a real relationship with him, so they can fleece him thoroughly.

And Charles is very innocent indeed when it comes to cards and women. Especially women. This looks like it’s going to be easy work for Jean, but a complication develops. Charles is so helpless that she can’t help liking him. And he’s kind of cute. And he’s a nice guy. And he really likes her. Pretty soon Jean has suffered the ultimate catastrophe - she’s fallen in love with a mark. And despite her cynical exterior Jean is the kind of girl who, when she falls in love, falls in love in a big way.

Jean intends to come clean about her criminal past. It would of course be very awkward indeed if Charles were to find out the truth before she has a chance to tell him, and of course that’s exactly what happens. That unfortunate circumstance seems to put an end to their wedding plans but there are more plot twists to come. Jean can’t bring herself to write this whole affair off to experience and hatches an unlikely plan to pose as an English noblewoman to get her revenge for being jilted.

The first half of the film is dazzling screwball comedy; the second half is not quite so strong. There’s also a tendency at times for the comedy to veer a bit too close to slapstick for my liking. Of course if you don’t share my aversion for slapstick you will find this to be less of a problem.

The support cast is generally good with Charles Coburn as the phony colonel being a standout. More problematic is the casting of Henry Fonda as the male lead. He’s an actor I’ve always disliked although he’s more successful in this role than I’d have expected, and even at times almost likeable. His performance still doesn’t erase my doubts about his suitability for screwball comedy.

There are no such problems with Barbara Stanwyck’s performance. She’s terrific although perhaps more convincing in the first half of the movie as the delightfully immoral confidence trickster than as the bogus noblewoman. There’s some remarkably risque dialogue in this movie which she delivers with a good deal of relish.

Despite some minor weaknesses this is mostly enormous fun. Umbrella Entertainment have done a reasonable job with the region 4 DVD release.
Posted by dfordoom at 10:47 PM