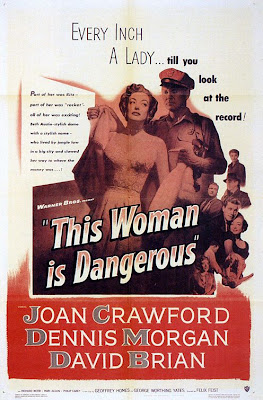 Joan Crawford apparently considered This Woman Is Dangerous to be her worst movie. Despite this it’s not entirely without interest.

This was her last movie under her contract with Warner Brothers. It had been a very successful seven years but by 1952 when This Woman Is Dangerous was made Crawford felt it was time to move on. Her next movie, Sudden Fear, was an RKO release and it garnered her an Academy Award nomination so perhaps she had a point.

Crawford plays Beth Austin, a successful gang leader. Before this she had certainly played women who were involved with mobsters (as in the excellent The Damned Don't Cry in 1950) but this time she’s a fully fledged gangster.

She’s the brains of the outfit. The Jackson brothers provide the muscle. Matt Jackson is Beth’s boyfriend and he’s a loose cannon to say the least. His brother Will is more vicious but more stable while Will’s wife Ann is the other permanent member of the gang. Other crooks seem to be recruited as needed.

Their specialty is daring robberies and their method makes use of Beth’s veneer of classiness. She is able to appear right at home in expensive hotels and casinos and she can coordinate the robberies from the inside. How an ex-con like Beth came by this veneer of class is never explained.

Now Beth has a major problem. She is going blind. An operation will be required to save her sight and the only surgeon capable of doing it is in Indiana. She sets off for Indiana leaving instructions for the rest of the gang to lie low after their latest heist. As might have been predicted the hot-headed Matt’s idea of lying low involves shooting cops so no the heat is really on.

Matt is insanely jealous. Mostly his jealousy is unjustified and unreasonable but this time he really does have something to be jealous about. Beth has become more than a little friendly with her handsome charming eye surgeon, Dr Ben Halleck (Dennis Morgan). He has real class and makes Matt look like the loser he is. Romance is blossoming.

Unfortunately this romance faces other obstacles apart from Beth’s psychotic criminal boyfriend. The FBI is on her trail and they’re on the trail of the rest of her gang as well.

Where this movie goes wrong is with Joan Crawford’s character. She’s too classy and too much the lady to be convincing as an ex-con and mobster, at least without some kind of backstory which the movie fails to provide. Crawford is watchable, as always, but the script gives her little to work with. Dennis Morgan as the eye surgeon is a bit too bland and too nice to be the sort of man that a dangerous female mobster would fall for. David Brian as the out-of-control trigger-happy boyfriend is great fun.

The plot is difficult to take seriously but despite its flaws This Woman Is Dangerous is still enjoyable silliness with a definite camp edge to it.

You can get it on DVD-R in the Warner Archive Collection.
Posted by dfordoom at 3:15 PM