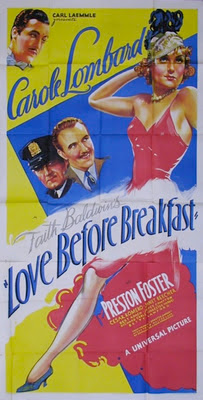 Lombard plays Kay Colby, and she has two men wanting to marry her. She’s more or less engaged to Bill Wadsworth (Cesar Romero) but she doesn’t seem entirely sure she wants to marry him. The very rich Scott Miler (Preston Foster) is Wadsworth’s romantic rival, and MIller is so determined to get her he buys the company Wadsworth works for just so he can send his rival to Japan to get him out of the way.

Miller then sets to work wooing Kay. Which is not an easy task. Kay thinks she hates Miller but it seems she might simply be trying to persuade herself she’s still in love with Bill. When Scott finally decides that maybe it’s futile pursuing her Kay panics. She’s done everything possible to discourage him but when he actually becomes discouraged she’s devastated.

No matter how talented they might be a romantic comedy star needs a co-star they can strikes sparks off and this was perhaps particularly true of Lombard. In My Man Godfrey and Twentieth Century she found co-stars who were worthy of her in the persons of William Powell (to whom she had been married) and John Barrymore. But in Hands Across the Table she found her ideal co-star in the perhaps slightly surprising person of Fed MacMurray. Lombard and MacMurray had a magical chemistry and were to be teamed again in The Princess Comes Across and the delightful True Confession

That kind of chemistry is sadly lacking in Love Before Breakfast. Cesar Romero as Bill and Preston Foster as Scott just don’t have the necessary charisma to convince the audience that a woman like Carole Lombard would be interested in them.

The other problem is that Lombard’s talents, although impressive, were rather specialised. In a conventional romantic comedy she wasn’t really at her best. It was in the screwball comedy that she really bloomed, and in that particular style of movie she had no equal. Other actresses made one or two great screwball comedies (such as Katharine Hepburn in Bringing Up Baby) but Lombard was the queen of the screwball comedy. She needed to play a character with the madcap quality of the screwball comedy heroine and she needed a script with plenty of zaniness. Love Before Breakfast is just a tiny bit too conventional to unleash the full Lombard potential.

Despite all these caveats Love Before Breakfast is still an entertaining and likeable movie, and Lombard puts everything she has into the performance. Just don’t expect the kind of sublime movie magic she and Fred MacMurray delivered in Hands Across the Table.

The movie is included in the superb Carole Lombard Glamour Collection DVD set, which is most definitely worth buying.
Posted by dfordoom at 9:50 PM