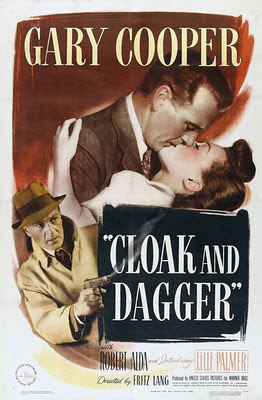 Cloak and Dagger is not generally regarded as one of Fritz Lang’s more important American films but it’s actually an underrated and very successful production.

Made in 1946, just after the end of the war, it’s the fourth and last of Lang’s American espionage thrillers.

The movie hits the ground running with the opening sequence showing Allied agents in occupied Europe being gunned down in the middle of despatching a vital radio message to their controllers. This establishes the mood of the whole film - heroism juxtaposed with brutality and tragedy. This will be a rather dark spy film, although it’s dark without being cynical. The heroism is as real as the brutality.

The partial message is enough to indicate that the Nazis are fairly well advanced in a program to develop nuclear weapons, but just how advanced remains unclear. The Allies obviously need to find out and the American spy service, the OSS, enlists the help of a mild-mannered nuclear physicist working at a quiet midwestern university. But while Professor Alvah Jesper (Gary Cooper) might indeed be mild-mannered, in fact almost the archetypal slightly dotty and very unworldly scientists with his head in the clouds, he’s actually working on the Manhattan Project, helping to develop the American atomic bomb. He hates the very idea of such a weapon, but he consoles himself with the thought that if such a weapon is to exist it had better be developed by the Allies rather than the Axis powers.

Now he finds himself with even more important work to do. A leading German physicist, Katerin Loder, has defected to Switzerland. Jesper is persuaded to join the OSS and to make contact with her, to discover how close the Germans are to success and if possible to find a way to get her out of Switzerland.

It all goes horribly and tragically wrong. The inexperienced Jesper makes some basic errors in spycraft and falls for the charms of a beautiful expatriate American who is in fact a Gestapo agent. Jesper learns his lesson and finds within himself a determination he had not realised he possessed. Without being conscious of the fact he has become a quiet unassuming hero. He comes up with a new plan, to contact a brilliant Italian physicist who is working on the German A-bomb. He gambles that Professor Polda is almost certainly doing this work against his will, which turns out to be quite true. Polda’s daughter is being held as a hostage to ensure his coöperation. Al Jesper now conceives an even more daring plan - to get both Polda and his daughter safely to England.

Among the Italian partisan fighters with whom he works to achieve his aim is the beautiful Gina (Lilli Palmer). The main action now breaks off while the focus shifts to the blossoming romance between Al Jesper and Gina but this is not merely a romantic interlude inserted to provide some sort of obligatory love interest for the hero. This episode is crucial to the film. Gina is brave and resourceful but her dangerous work has left her emotionally scarred. She has nightmares, she is developing symptoms of paranoia, she is becoming cynical and embittered and she is starting to forget that people can be kind and decent and that tenderness and love still exist.

Lang handles this romance with both sensitivity and economy. A stray cat and a child’s carousel provide poignant and effective symbols of the growing understanding between these two characters.

When we get back to the main espionage narrative we see once more heroism mingled with tragedy. The original ending was apparently changed by the studio but the existing ending works extremely well. Lang intended to strengthen the message about the dangers of atomic weapons but that original ending might have somewhat dated the film. The ending as it stands is ambiguously hopeful, certainly not a simplistic happy ending. The message is that the good guys can win but they pay a high price for doing so. Love might triumph as well, but there are no guarantees. Fate could still step in, the world is still a dangerous place and the triumph of love is fragile.

Gary Cooper isn’t everyone’s favourite actor but he’s really quite superb here. He has the difficult task of convincing us that he’s both a nuclear physicist and a heroic spy, and at the same time a very ordinary man who wants nothing more than a quiet life. Cooper carries this off with ease and grace. A very underrated and surprising versatile actor who is ideal for Lang’s purposes in this movie. Lilli Palmer is excellent as well. There’s no sizzling sexual chemistry between these two but there’s a very real and much deeper emotional chemistry.

Lang is in complete control in this film. While admitting the brilliance of his early German movies it has to be said that Lang’s Hollywood movies are much more disciplined. There are no wasted scenes. Lang makes his points about the dangers of nuclear weaponry and the evil of totalitarianism while still managing to make a very effective and very tense commercial spy thriller and at the same time making a movie that is very much a Fritz Lang movie. These are compromises certainly, but Lang demonstrates his ability to make intelligent and thoughtful compromises and that;s what the movie business is all about.

There are two scenes that deserve special mention. There’s a clever reference to Lang’s German masterpiece M in a scene where we see a child’s toy ball bouncing down a staircase to land at the feet of a dead Italian secret policeman, and this immediately follows the graphic and brutal fight scene in which Al Jesper kills the policeman, a scene in which he discovers that killing a man is messy, difficult and extremely unpleasant, a scene that clearly influenced a similar scene in Hitchcock’s Torn Curtain.

Palladium’s all-region PAL DVD release is acceptable enough and relatively inexpensive but it highlights the need for Lang’s American movies to get the special edition treatment on DVD or Blu-Ray. It’s appalling that such excellent movies by such an important film-maker are only available in at best adequate DVD releases.
Posted by dfordoom at 6:40 PM