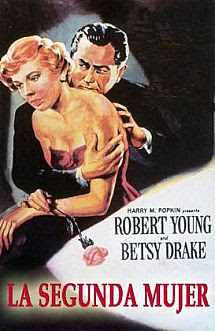 Ignore the fact that The Second Woman has been claimed by some folks as a film noir. Accept it as a Hitchcockian psychological thriller and you’ll have a reasonably good time with it.

It was made in 1950, when Hitchcock was very hot box office indeed. So this one rips off not one, but no less than three, Hitchcock hits. OK, so it isn’t as good as a genuine Hitchcock movie. Most films aren’t. It’s still fun.

It starts off seeming like an almost direct steal from Rebecca - the voiceover of a woman talking about the past, the ruin of a spectacular house, then the story starts in flashback.

The house in question belongs to Jeff Cohalan, a brooding hero still mourning the tragic death of his bride Vivian a year earlier. We don’t see her, just a painting of her. He finds it painful to talk about her. More shades of Rebecca.

The flashback takes us back to a meeting on a train, where charming but moodily tragic architect Jeff Cohalan (Robert Young) encounters Ellen Foster (Betsy Drake). He’s just been chatting to an old friend of his, a psychiatrist, who is very worried about him. Now we’re starting to get into Spellbound territory. We’re introduced to the idea that Cohalan may be more than just troubled, he may be seriously unstable or even quite mad.

Cohalan and Ellen hit it off pretty well. He even invites her into his house, an event that causes general amazement since he has allowed no-one at all to enter the house since the tragedy a year earlier. Apart from mourning his loss our hero also seems to be somewhat given to self-pity, even possibly just a little paranoid. He believes he is shadowed by bad luck. Everything goes wrong for him. And indeed everything does seem to go wrong for him. His horse has to be destroyed when it breaks its leg in mysterious circumstances. His dog does suddenly. His painting of Vivian is ruined, his roses wither and die. But is this bad luck, or is someone out to get him? Or is he insane and is he doing these things to himself, possibly out of guilt?

We find out more about his past. Vivian had been the daughter of his friend Ben Sheppard. On the eve of the wedding she was killed in a car accident, with Cohalan being the driver at the time.

Cohalan becomes ever moodier while the evidence that he may be suffering from delusions steadily mounts. Now we move into Suspicion territory as the psychiatrist warns Ellen she may be in danger from him. She chooses to continue to believe in him. She believes she can help him to uncover the solution to the mysterious events that have haunted him.

It’s a rather handsome movie with some great location footage of the California coast. Cohalan’s house is an impressive modernist structure in a truly spectacular setting.

Robert Young was surely the most irritating American actor of the 30s. His performance here comes as pleasant surprise - the annoying mannerisms and the tiresome constant jokiness have disappeared and he pulls off the dark suffering hero thing very competently. Betsy Drake is a engaging enough heroine. John Sutton fulfills the sinister, oily cad role extremely well as Keith Ferris, who is another protégé of Ben Sheppard’s.

The Second Woman was made by Cardinal Pictures, an outfit responsible for several good noirish thrillers around this time including D.O.A. and Impact. It’s in the public domain. My copy came from one of Mill Creek’s budget mystery movie boxed sets. The print is a bit washed out but it’s generally quite acceptable. This is by no means a great movie but it’s solid entertainment.