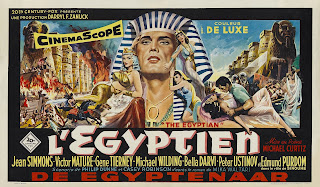 A 1950s Hollywood epic set in ancient Egypt and starring Victor Mature, Gene Tierney and Jean Simmons - now that has to be fun. And The Egyptian does not disappoint.

The Egyptian of the title is a doctor named Sinuhe (played by Edmund Purdom). We see him at the beginning of the film as an old man in exile and his story is told in flashback. He was once young and idealistic, burning with a desire to bring the benefits of modern medicine (and in the 14th century BC Egyptian medicine was most definitely at the cutting edge) to the poor. His father is a doctor as well, but he’s not his real father. As a baby Sinuhe was found floating in the Nile in a small reed basket, this being a common method of disposing of unwanted babies.

Sinuhe has an unlikely friend, a rambunctious but good-natured brawler named Horemheb (Victor Mature). Horemheb’s fondest ambition is to serve in Pharaoh’s Guard but since he is merely the son of a humble cheese-maker this ambition seems unlikely to be fulfilled.

Then fate steps in. Sinuhe and Horemheb are hunting lions in their chariot when they come across what appears to be a crazed holy man. They save this unfortunate from becoming dinner for a hungry lion.

It turns out the man really is a crazed holy man, but he also happens to be the pharaoh, the notorious Akhenaten. In saving him they laid hands on him, which is a capital offence. Luckily Akhenaten takes a dim view of hallowed traditions and he not only allows them to live, he rewards them. Horemheb will indeed serve in Pharaoh’s Guard, while Sinuhe will become part-time official physician to Pharaoh’s family.

Fate however is about to step in again, in the form of a woman. Nefer is beautiful and glamorous and Sinuhe is captivated by her. He will do anything for her. Sinuhe’s judgment is very poor when it comes to women. He has a nice girl, Merit (Jean Simmons), who is crazy about him but he is obsessed by Nefer. Nefer is a courtesan but she is also a very dangerous woman who enjoys seducing and corrupting innocent young men.

And Sinuhe is well and truly corrupted. His parents will pay the price for his fatal obsession and Sinuhe himself will be reduced to despair and forced to flee Egypt.

Sinuhe travels the known world and his fame as a physician grows. He is on a quest for redemption and slowly he is rebuilding his life and his self-respect. But fate is not yet finished wit him. It will lead him back to Egypt, and his life will once more be entwined with the lives of Horemheb, Merit and Akhenaten. Akhenaten’s religious innovations and his mystical belief in the virtues of turning the other cheek will lead Egypt to the brink of ruin and Sinuhe will be faced with a terrible dilemma.

It’s all outrageously melodramatic and very camp, just as you’d expect from a 1954 Hollywood costume epic, but this movie has some surprising features. The moral dilemmas are real and they’re complex. Sinuhe is basically a good man but with serious moral weaknesses. Akhenaten is almost saintly but he is also a catastrophically bad ruler. Horemheb proves to be very ambitious indeed but his ambitions lead him on a path that will prove to be Egypt’s salvation. And Akhenaten’s sister Baketamon (Gene Tierney) is also motivated both by personal ambition and a desire to save her country from destruction.

The most morally challenged characters end up doing the most good while the most virtuous characters do an immense amount of mischief. Ruling a kingdom and conducting international relations require common sense and hard-headedness more than they require goodness. This kind of moral ambiguity is very unexpected in this type of movie.

Equally surprising is the very open and non-judgmental treatment of the issue of the illegitimate son of Sinuhe and Merit.

The acting tends towards the melodramatic, but that goes with the territory. Edmund Purdom is rather on the dull side. Victor Mature is enormous fun. Gene Tierney isn’t given enough to do but she does have a few great scenes and her performance is on balance the best of any of the cast members. Michael Wilding is annoyingly other-worldly and mystically woolly-headed but it’s a performance that suits the character. Jean Simmons is solid as always and even Peter Ustinov (as Sinuhe’s dishonest but faithful servant) is less irritating than usual.

Needless to say it’s visually impressive although the use of process shots and matte paintings is very obvious. Personally I don’t mind that - I think the obvious artificiality works in the movie’s favour, making it a kind of fable.

And the very idea of making a movie about the infamous heretic pharaoh is incredibly cool. Akhenaten’s religious reforms did not survive him but they’re extremely interesting. He was in effect trying to replace the established religion of the country with a new monotheistic faith. Had he succeeded he’d be known as one of the great religious leaders of history.

The Egyptian is a strange mix of melodrama and profundity and while it’s an uneasy mix it makes for one of the more intriguing Hollywood movies of the 50s. And it’s wonderfully entertaining. It’s unusual enough to qualify as a must-see movie in its own eccentric way.

Bounty’s Region 4 DVD lacks extras but it’s a lovely transfer and it’s in the proper Cinemascope aspect ratio.
Posted by dfordoom at 1:15 AM