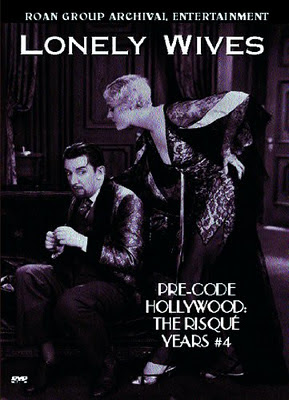 Lonely Wives is a movie that I discovered in one of those Mill Creek sets of public domain movies but don’t be put off by that. It’s actually a rather outrageous little pre-code sex farce.

Edward Everett Horton is a familiar face to classic movie fans but he’s mostly known for his comic relief supporting performances. Lonely Wives gave him a rare opportunity for a starring role and it’s an opportunity he grabs with both hands.

Horton plays two roles, and this being classic farce much of the humour will come from the resulting instances of mistaken identity.

Richard ‘Dickie’ Smith (Horton) is a successful lawyer who is the soul of probity and clean living, devoted to his work. Until 8 o’clock each evening. At that hour we’re told he “blooms.” His mother-in-law Mrs Mantel tries to keep him on a short leash, especially at the moment when his wife is out of town. When he “blooms” he develops a taste for feminine company, not always of the most respectable kind.

The arrival of a new secretary will be the first temptation put in his way. Minty Minter (Patsy Ruth Miller) is the sort of girl that Smith’s mother-in-law strongly disapproves of. She particularly disapproves of the way Minty walks. When we see Minty walking we can see that she has a point. It’s the sort of walk that is conducive to unclean thoughts.

Minty sees an opportunity for her friend Diane O’Dare (Laura La Plante) to get the divorce she’s after, probably at no cost. Well no financial cost anyway. When Richard Smith blooms he is unlikely to be able to resist Diane’s charms. Diane wants a divorce because her husband goes out most evenings. If he went out every evening she wouldn’t be concerned, but it’s the uncertainty she objects to. Such unpredictability can be inconvenient for a high-spirited girl like Diane. It can disrupt her social life.

With the chance of having a night on the town with not one but two attractive young ladies Smith is understandably anxious to slip way for the evening. But how to evade that mother-in-law? Then a piece of good fortune comes his way. A vaudeville entertainer known as Felix the Great Zero, whose act is based on impersonations of prominent people, wants to incorporate an impersonation of Smith into his act. This entertainer (also played by Horton) does in fact bear a striking resemblance to the lawyer. Smith agrees to Felix’s proposal on the condition that Felix take his place in his home that evening, so that his mother-in-law won’t realise he’s slipped out.

Of course it all soon becomes hopelessly complicated, especially when Smith’s wife arrives home unexpectedly while Felix’s wife also become involved (and unfortunately for Smith he isn’t aware of the identity of Felix’s wife). Everyone seems to be getting mixed up with the wrong husband or the wrong wife. Most confused of all is Smith’s butler, whose permanent state of intoxication does nothing to clarify matters.

Maude Eburne as Mrs Mantel is extremely irritating but the other supporting players are generally very good. What really matters is that Edward Everett Horton is in scintillating form and is good enough to make this a delightful entertainment.

The dialogue is exceptionally risque. There’s scarcely a line or a situation that doesn’t have a sexual connotation. Most importantly, it’s both naughty and funny. It’s all great fun.

Print quality is more or less what you expect from Mill Creek but it’s quite watchable.