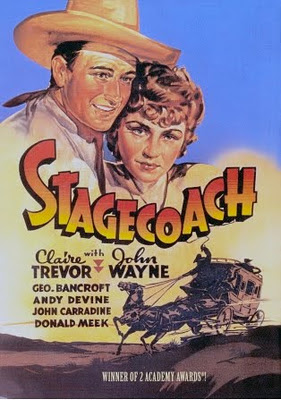 In 1939 the western had been a staple of Hollywood filmmaking for two decades but it was a genre that was not taken very seriously. Westerns were low-budget potboilers cranked out mainly by Poverty Row studios. John Ford’s Stagecoach changed all that. It ushered in the epic western, westerns made as A-pictures featuring major stars and made by the top talents at the big studios.

It’s worth noting that it was not the only significant western to appear in 1939. Cecil B. DeMoIle's Union Pacific would also adopt an epic approach, and while George Marshall’s Destry Rides Again took a satirical view of the genre it was definitely a major step in the development of the western as something more than just horse operas.

The plot is simple enough. A stagecoach has to run the gauntlet of hostile Apaches while the nine passengers and crew slowly reveal the depth, or in some cases the lack of depth, of their characters. One of the passengers is the Ringo Kid (John Wayne) and the journey has particular significance for him. He has broken out of prison and when he reaches his destination he will have to confront the three brothers who killed his father and his own brother. Since they’re tough hombres and he’s really just a goodnatured cowboy the probability is that this is for him a journey to his own death. At least the assumption of everyone else is that he hasn’t got a chance.

If you focus on the story then you could easily conclude that Stagecoach is really nothing special. It’s somewhat corny, it’s sentimental, the characters are stock types, the social commentary is heavy-handed and obvious (the social outcasts turn out to be more virtuous than the respectable types). None of that matters. What matters is Ford’s very serious approach to this material. He treats it as the stuff of epic. He gives it a grandeur that makes it work on that level, that forces the viewer to take it as seriously as the director did.

Ford had a good cast to work with and he got the best from them. While the characters may have been stock types that in some ways adds to the epic feel. We don’t expect the heroes of myth to be fully rounded characters. That would get in the way of the myth. And the performances are memorable. There’s a chilling moment when the aristocratic southern gambler played by John Carradine shows that he really does takes his code of chivalry as seriously as he claims to, and while we’re horrified by what he’s about to do it has to be admitted that it forces us to take the character as seriously as he takes himself.

Ford was a Catholic and the theme of redemption is central to the film. And there are three characters in particular need of redemption. There’s the alcoholic doctor (a role that won Thomas Mitchell an Oscar). Secondly there’s the whore, played by Claire Trevor, who manages to persuade us to believe she really is a whore with a heart of gold.

And then there’s the Ringo Kid. This is the role that made John Wayne a star. Prior to this he was regarded as a very lightweight B-western actor. This movie was not just the making of him as a star, but as an actor as well. Ford believed in him and cast him over the strong objections of producer Walter Wanger, and Wayne repaid the director’s faith handsomely. I find myself admiring John Wayne as an actor more and more. In our modern age which regards serious acting as something that should look as tortured and as difficult as possible the quiet authority of Wayne may not seem like real acting but in fact it’s far more effective than the contrived histrionics of today’s stars.

In this film Ford also provided an object lesson in how to shoot an action sequence. The extended chase sequence with the stagecoach being pursued by an Apache war party is a template for just about every similar scene in every subsequent movie but while it’s been copied countless times it’s rarely been surpassed. Ford also provides a lesson in pacing and structure, with character-driven scenes and action scenes in perfect balance. Orson Welles believed that you could learn everything you needed to know about filmmaking from watching Stagecoach and he was probably right.

The first of John Ford’s great westerns, a movie with a huge reputation that lives up to that reputation.
Posted by dfordoom at 11:48 AM