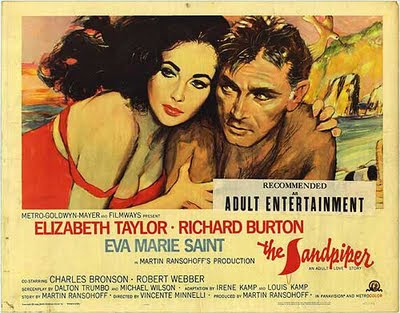 In the 1960s Elizabeth Taylor and Richard Burton were the world’s most famous celebrity lovers, their stormy private life threatening to overshadow their reputations as actors. They made numerous movies together, most of which were regarded with a certain amount of scorn by critics. The Sandpiper, made in 1965, has a particularly poor reputation.

Elizabeth Taylor plays Laura Reynolds, a slightly eccentric unmarried bohemian artist raising her son Danny in a beach house in California. The son keeps getting into trouble, largely because she has raised him to regard rules and laws with contempt. Finally she is offered a stark choice - he can either be sent to reform school, or he can be sent to San Simeon School. This is an exclusive and very traditional Episcopalian boarding school, run by the eminently respectable Reverend Dr Edward Hewitt (Richard Burton).

Laura considers any kind of school to be a kind of prison but an Simeon at least sounds marginally preferable to reform school. The local judge pulls some strings to get the boy accepted and to have his tuition fees paid.

Danny finds San Simeon to be much less awful than he expected. In fact he quite likes it. Dr Hewitt takes his duties as headmaster very seriously and feels he needs to get to know Danny’s mother better. Purely for professional reasons of course. The fact that Danny’s mother is a ravishingly beautiful free spirit who does a spot of nude modeling for local bohemian artists has nothing to do with the interest that Dr Hewitt takes in her. At least that’s what he tells himself, and for a while he even believes it. Of course it isn’t very long before they end up sleeping together.

Dr Hewitt is a happily married man, or at least he was until Laura came along. Now he comes to question everything about his life. He and his wife Claire (Eva Marie Saint) had started out with such fine ambitions to live a Christian life and to dedicate themselves to the cause of educating the young but over the years they have learnt to compromise. Dr Hewitt has learnt how to ingratiate himself with the wealthy in order to get more money for his school. Now he feels he has found something pure and fine and noble. Although his wife is more inclined to think he’s just found a younger and sexier woman.

Now Dr Hewitt and Laura have to decide where their lives are going.

The plot is of course laughable. There are countless cringe-inducing moments (many provided by Charles Bronson as a bohemian artist). The whole bohemian proto-hippie free-love free-spirit thing is embarrassing. Much of the dialogue is outrageously over-ripe. This could easily have been a major cinematic train wreck. But despite its egregious faults it’s actually rather entertaining. The biggest mistake you can make with material like this is to try to approach it with subtlety. Luckily there’s no danger of Burton and Taylor making that mistake. Nor is there any danger that director Vincente Minnelli will make such an error - he had a real flair for melodrama and wasn’t the slightest bit afraid of going over-the-top. This is after all the guy who directed The Bad and the Beautiful and Two Weeks in Another Town. In some ways he’s an ideal director for a slice of Burrton-Taylor excess.

Minnelli is also a man who knows how to make attractive movies and he makes the most of the California locations.

I always get excited by movies featuring Richard Burton as a man of the cloth (movies like Night of the Iguana). Preachers tortured by lust were a bit of a Burton specialty. Taylor is delightfully camp. Laura is a total airhead but she’s a great deal of fun to watch. Poor Eva Marie Saint is left with the totally thankless role of the devoted and faithful wife and there’s really not much she can do with it.

The early 60s was a fascinating and neglected period of movie history. The Production Code was clearly becoming untenable and the studios were consciously trying to make more adult-oriented movies. The Sandpiper is one of the many movies of that period that tried to take a sophisticated modern approach to sex while still being careful not to go too far.

At the same time it was an era when Hollywood was trying to make big pictures and the combination of these two tendencies resulted in some strange but outrageously entertaining movies.

It’s probably fair to say that in order to enjoy The Sandpiper you have to be a fan of Burton and Taylor and you have to have a bit of a taste for 60s camp but if you do fall into those categories you should find plenty to enjoy here.

I saw this one on cable TV but it is available on DVD.
Posted by dfordoom at 12:30 PM