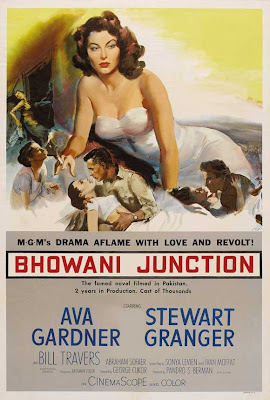 Bhowani Junction is a good example of classical Hollywood film-making in the declining days of the studio system, and a reminder that Hollywood in the 50s could still deliver the goods.

George Cukor directed this film about fractured identities and divided loyalties in India in the last days of the British Raj. The stars, Stewart Granger and Ava Gardner, both felt (with some justification) that MGM failed to take them seriously enough as actors and failed to give them opportunities to show what they could do. Bhowani Junction gives them the chance to do some real acting and they acquit themselves well.

Granger is Colonel Rodney Savage, a career British army officer struggling to do his duty without betraying his humanity. His assignment is a thankless one but he’s the kind of man who is always inclined to make the best of a bad job.

Gardner is Victoria Jones. She is also a British army officer, but her situation is very different. Her father was British, her mother Indian. The prospect of independence for India was a frightening one for Anglo-Indians who found themselves belonging nowhere and wanted by no-one. To the British they were an embarrassment while to many Indians they were an object of hatred.

Having always thought of herself as being essentially British she now tries to re-invent herself as an Indian. She had been expected to marry another Anglo-Indian, ambitious young railway official Patrick Taylor (Bill Travers) but now she is persuaded she should marry an Indian. That’s only one of many difficulties she faces. When a sleazy British officer tries to rape her she kills him, and agrees that the body should be hidden.

Colonel Savage is fully involved trying to keep the railways running and at the same time battling against both the moderate Congress Party who seek independence through passive resistance and communist terrorists who seek to achieve the same goal through violence. And at the same time he finds himself drawn to Victoria Jones. It takes him a while to admit to himself that his feelings for her go behind mere concern for a subordinate who has got herself into trouble. Without their really realising what is happening an emotional bond is forming that will develop into love. But can they possibly have any future together?

Stewart Granger gives a fine understated performance. He’s not a story-book noble hero but Colonel Savage is fundamentally a decent man doing his best. Victoria Jones however is the key character. Ava Gardner’s performance is crucial, and she does a superb job. Bil Travers is the weak link, tending to be rather too histrionic.

This was a big production for MGM with plenty of location shooting but it’s by no means movie that relies purely on spectacle. The writing, the directing and the acting of the two leads are all thoughtful and subtle. I caught this one on TCM but I’m tempted to grab it on DVD.
Posted by dfordoom at 12:15 AM