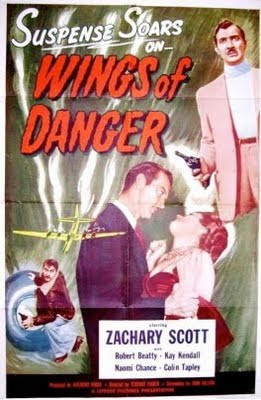 Wings of Danger was one of Hammer’s early 50s film noir titles. It’s definitely one of the lesser entries in the Hammer film noir cycle.

The idea of a film noir aviation thriller is promising enough. Richard Van Ness (known to his friends simply as Van and played by Zachary Scott) and Nick Talbot (Robert Beatty) are flyers with a very small airline. They’re fast friends although Van is somewhat disturbed by Nick’s irresponsibility. This comes to a head when Nick insists on taking off in atrocious weather to deliver a bunch of flowers to Alexia (Kay Kendall). Nick’s plane fails to arrive and the following day wreckage is found off the coast.

The inquest finds no suspicious circumstances but Van coms across evidence that Nick’s past was perhaps just a little on the shady side. And the airline owner may be equally shady.

Van is in love with Nick’s sister Avril. It’s not quite clear where Alexia fits in although it’s fairly obvious that she is a bit of a bad girl and she may also be involved in some of the dubious undertakings that NIck was mixed up with. There’s also a blackmail subplot.

It takes most of the film’s modest 73-minute running time for these various plot strands to start to come together. When they do connect the results are satisfactory enough but some viewers may not have the patience to stick around long enough to find out. And some plot elements seem rather undeveloped.

Terence Fisher directed but while the movie is fast-paced (as you expect from Fisher) it lacks a little in the area of dramatic tension compared to most of his films.

Hammer’s distribution deal with Lippert Films in the US required them to include a second-rank American star in their pictures. This was either someone whose career was in decline (like George Brent) or someone who had never quite made the grade as a major star but was still a well-known name and a recognisable face (like Lizabeth Scot or Dan Duryea). Either Hammer showed very good judgment in picking these actors or they were very lucky because most of these American imports gave pretty good performances. Zachary Scott kind of fits into both categories - he was one of those actors who looked for a while like being a big star but it didn’t happen and by 1952 he was certainly struggling. His performance is perfectly adequate here.

The British supporting cast is solid enough with Kay Kendall being the standout.

There are some nice shots of rather cool vintage aircraft although the flying angle isn’t developed quite as strongly as one might have hoped.

VCI’s DVD presentation, in their Hammer Film Noir series, is quite acceptable. Not a great movie but still worth a look.
Posted by dfordoom at 1:43 PM